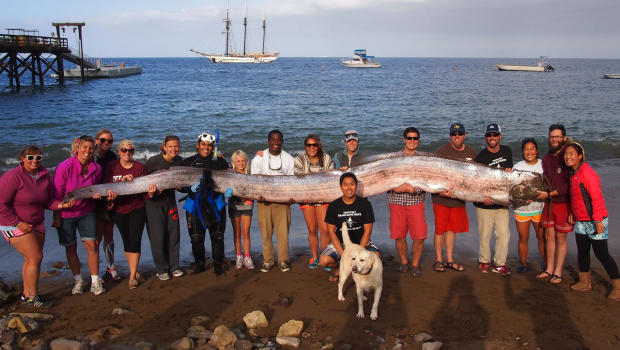 Some stories that we hear on the news, sounds remarkably similar to a headline on the National Enquirer. The “magazine” publication sells cheap and usually completely false “news” to those who are interested and gullible enough to read and believe it. One story out of California, had us questioning if it was indeed another one of those cheesy tabloid headlines. Oddly enough, the story is completely true, and we have the scoop!

When a marine science instructor was snorkeling off of the California coast this past Sunday, something caught her eye that made her to a double take – and then a triple take. An 18-foot-long silver carcass of what appeared to be an oarfish was discovered upon further inspection. Jasmine Santana is the woman who discovered the dead creature, and she recruited the help of fifteen people to help her drag the creature to the shore. The eyes on the animal’s head were the size of half dollars, matching its impressive length. Santana works for the Catalina Island Marine Institute, and the scientists are calling the find a “discovery of a lifetime.”

Oarfish are rarely seen, due to their usual dwelling of up to 300 feet below the ocean’s surface. The body was on display for students at the institute, before being buried in the sand for decomposition. After the fish has successfully decomposed, the skeleton will be preserved and put on display. The oarfish, which can grow up to 50 feet long, is largely believed to be the “sea serpent” talked about in many stories throughout history.