A Pile of Lego Blocks Turns into 1969 ‘Vette 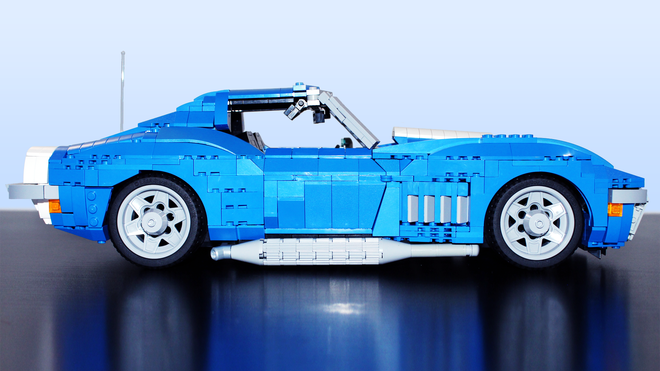 When most of us are scouring the internet for used cars , they typically are the type with an engine and actual gas pedals. Okay, maybe much more than usually. So what are the other internet searches for cars all about? We will give you a hint…they are made out of small blocks and take a skilled creative mind to create. If you haven’t guessed yet, we are talking about Lego, the famous small blocks that can be crafted into nearly anything.

The Danish company has recently come out with come cool auto kits recently, such as a 1962 Volkswagen Bus, and a vintage Mini Cooper. Apparently, there is high demand for the company to release a Corvette Lego kit, specifically from the 1969 model  year. One enthusiast has spent time creating his very own version of the vintage C3, and we have to say we are quite impressed.

How a Pile of Lego Blocks Became a 1963 Corvette

Lego Ideas is a website for fans of Lego, and one user created his very own 1969 Corvette model out of the plastic blocks. Brickdater is the user name of the creator, and says that “Ever since I can remember I’ve always wanted a ’69 Vette. So I built one.” Despite the restrictions of using the angular Lego blocks, Brickdater was able to get the curves of the C3 down almost perfectly. The ‘Vette features a baby blue color with a white stripe running down the hood, and definitely looks like the 1969 Corvette.

Brickdater hopes that his design ends up in mass production so that others can also own their very own ’69 Corvette. The Lego Ideas website exists for the company to get new product ideas straight from the fans themselves. If the user gets 10,000 supporters for his design in a years time, then the Lego Review Board will evaluate it, give the design a thumbs up, and manufacture it. It’s a long road, but it just may happen.