Couple runs into Brad Pitt at their wedding reception 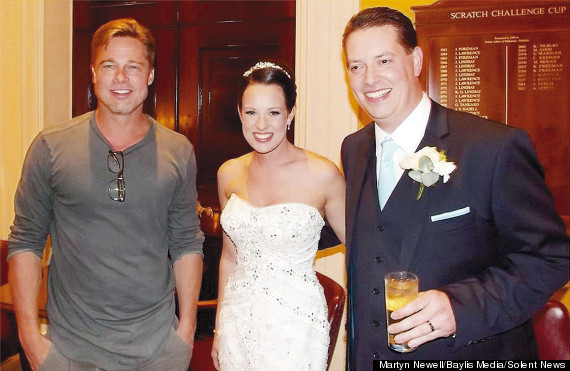 Getting married is often the biggest day in a person’s life. Whether man or woman, a wedding that symbolizes entering into a life-long commitment is no small deal. Many young girls plan their weddings from the first time they see a Disney princess movie, and by the time they are proposed to, have the entire event already planned in their heads. Anyone who has had a wedding will tell you, however, that things never go completely as planned. No amount of organizing, no attention to detail, and no amount of money paid to wedding planners will ever be able to promise a completely “exactly as you planned” event. Whehter you are getting married in Chicago, in Cincinnati, or in the United Kingdom – something always comes up that you didn’t expect.

For Abi Lingwood, that “something” unexpected was actually a quite welcome surprise. Her and her new husband Daniel were enjoying their wedding reception at the Stoke Park Hotel in Buckinghamshire, England, when Daniel spotted a familiar face at the bar. “My husband said to me that Brad Pitt was at the bar and you have got to come with me so he dragged me across the hotel. I thought he was joking,” Lingwood told a local newspaper. Brad Pitt was in town filming a World War II thriller, called “Fury,” and was at the hotel for a meeting. Abi and Daniel interrupted the business meeting to introduce themselves to Pitt, who obliged with a picture and compliments to the beautiful bride on her big day.

While her day didn’t go quite as planned, we are pretty sure that Abi didn’t mind the direction it took.