Drinking From The Toilet May Be Good For You? 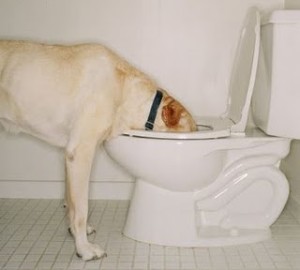 Imagine a terrible disaster strikes your home town.  We’ll leave the exact nature of the disaster up to you.  Feel free to go crazy with it; was it a tsunami? An earthquake? A zombie attack?  It doesn’t really matter.  The point is that now you’re trapped (or barricaded, if you went with the zombies) in your own home.  As supplies dwindle, thirst sets in.  Eventually, time finds you starting at your toilet, that porcelain bowl practically overflowing with water.  You find yourself wondering…could you…should you?  Well we at your Chevrolet Cincinnati dealer are here with some pretty shocking news:  soon enough, the answer will be a resounding yes.

The Bill and Melinda Gates foundation has been funding research that seeks to make the water in your toilet not just clean, but truly potable.   The research is being done at the Manchester University’s school of materials by nanotechnology expert Sarah Haigh.  Her innovative design consists of using nanotech to combine bacteria with nano-particles of metal to strip out the useful hydrogen.  After the hydrogen is removed, the remaining water is filtered, leaving it safe to drink.  Additionally, the hydrogen is turned into Hydrozene, which, she says, “is basically rocket fuel.”

Sarah Haigh and her team won a contest to develop the fuel-producing and water cleaning device of the future.  In doing so, she beat out more than 2,000 other contestants.   This victory brought her $100,000 from The Bill and Melinda Gates foundation, with the promise of one million more if they can produce a working prototype by 2013. The idea may seem a little gross, but it could prove to be the last line of defense in countries without clean water, as well as for people who are trapped in their homes as a result of a disaster.

The most surprising part of the whole thing though?

Dogs  had it right all along.

0 comment(s) so far on Drinking From The Toilet May Be Good For You?