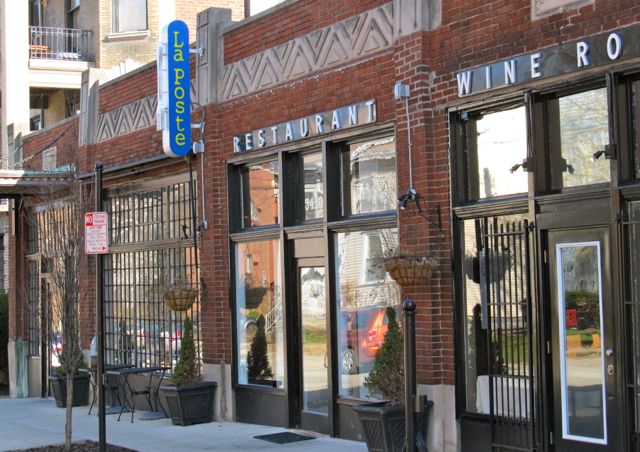 La Poste, the casual fine-dining restaurant in Clifton, has experienced quite a few changes recently. Both Chef David Taylor and General Manager Kelly Lough have left, with Kelly now managing over at Salazar, Over-the-Rhine. Thankfully, Andrew Mersmann was quick to fill in the shoes of chef de cuisine, a role he once had before he had left to run sister restaurant Django. He is back in Clifton now, and overseeing both restaurants while working on a new menu for La Poste. He hopes to unveil said menu around March 1, and owner Jens Rosenkrantz says there won’t be any dramatic changes to La Poste, which makes our Cincinnati car dealership happy!

One thing that will be happening is that Mersmann is going to be cooking for the Cincinnati E.A.T.S. event at La Poste on February 27th. This is the organization that hosts dinners at various Cincinnati restaurants, arranging for a tasting menu that introduces diners to the restaurant and to each other. La Poste’s offerings being with either a salad of the season with pistachio relish, tart cherry vinaigrette and gorgonzola, or a soup du jour. Then, diners have their choice of a braised pork belly with butternut squash puree, roasted apples and creme fraiche or mushroom ravioli, and then a choice of brick dough-wrapped ratatouille, chicken with acorn squash dumplings, or a 6-ounce strip steak with garlic mashed potatoes, asparagus, crab meat and hollandaise. The meal will close with bread pudding for dessert.

Sound tasty? Join in. An E.A.T.S. evening is comparable to a dinner party, with drinks beginning at 6:30 p.m. and everyone sitting down for dinner at 7:30. Tickets are under 50 dollars, and go up $5 for the two days before the event (and often sell out). You can snag them via Paypal at www.cincinnatieats.com. Oh, and look at this old video we dug up from the beginnings of La Poste! It only seemed fitting.

0 comment(s) so far on La Poste is Hosting Cincinnati E.A.T.S.