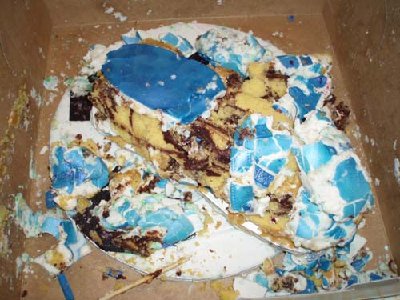 Aside from the obvious joy of spending time with loved ones, different holidays each carry their own unique perks. Christmas is obviously a season of giving and receiving, and opening presents is usually the highlight of people on this well-loved day. Holidays like Halloween and Easter have the obvious sweets bonus going for them, and I think everyone would agree that stuffing our faces to the point of being uncomfortable is the best part of Thanksgiving. Birthdays tie in a few of the perks from other holidays, like eating and opening presents – while having the extra special bonus of eating cake. For one woman in Washington state, the birthday tradition of getting to eat the birthday cake was changed by one feisty run-in at the courthouse.

An unidentified woman had to appear in court on her child’s birthday, so in an effort to keep the birthday cake from being eaten by her dog in the car, she decided to bring it into court with her. Generally, taking a cake with you into a place does not turn into an immediate problem, but this woman ran into the wrong person. As she passed through the courthouse security checkpoint, she had to set the cake on a table in order to walk through the metal detector. Robert Fredrickson was on his way to appear in front of a judge for a third-degree theft conviction, when the sight of the birthday cake was too much for him to handle. Fredrickson began mauling the cake and flinging fistfuls of the frosted cake into his mouth. A county sheriff’s deputy took the 50 year-old man to the ground where he was taken into custody.

While a local grocery store offered to replace the cake, the moral of this story stands – never take a cake into a courthouse.