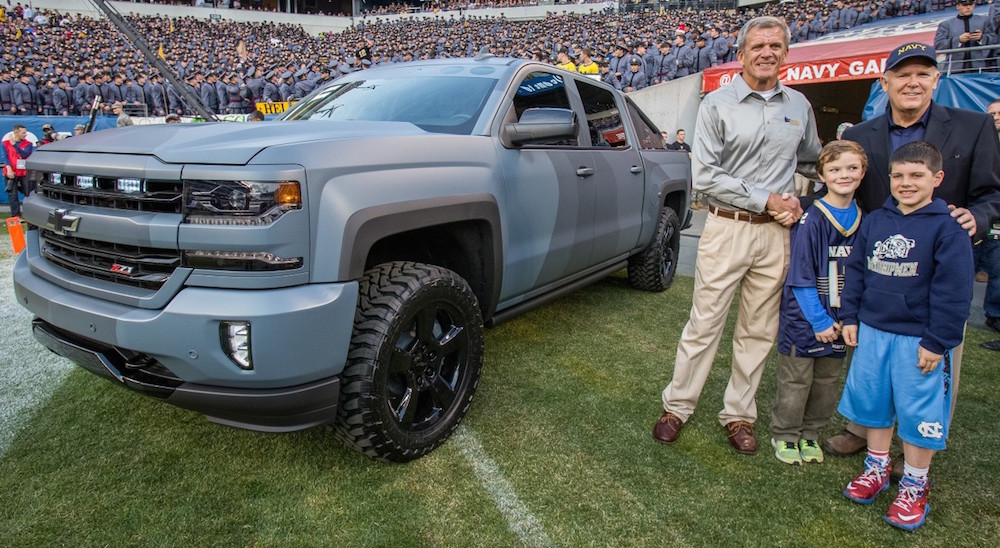 Every year for the past six, Chevy has been the official sponsor to the annual Army-Navy Football Game. During halftime, Chevy honors the men and women of our military and special forces. However, this year, it was a little different. This year, the halftime show showcased a special 2016 Chevy Silverado Special Ops Concept vehicle as a salute to their services.

Even while the Saturday Army-Navy game is an age old rivalry between two major American forces, it is up to Chevy to unite them and bring them together to honor their services. GM feel especially proud because it’s strong military history, as well. As part of Roosevelt’s war efforts during WWII, all GM plants were converted to producing an arsenal of military equipment. GM has verified that not a single civilian vehicle came from one of their assembly lines during wartime. Because of their contribution and vital role, GM and Chevy helped bring American victory back home. Given GM’s century-long support of the military, it should only make sense that they choose to stand tall for our service men and women.

Joining in the festivities of the game and Chevy presentation is former GM Chairman and CEO Dan Akerson, a U.S. Naval Academy graduate along with Master Chief Rick Kaiser, executive director of the National Navy SEAL museum, who will not only salute the service men and women, but usher in the Silverado Special Ops Concept.

What’s more exciting about this concept is while Chevy Silverado fans have been getting teased with this concept for quite some time now, Chevy kept them in the dark about it until it actually rolled out onto the field. It was at this moment, that fans and enthusiasts alike could see this concept brought to life. And what a sight to behold.

Rugged, tough, intimidating. Yes, these words accurately describe every player on both teams, as well as all our service men and women, but so to do they describe the Special Ops concept. It was quite the showing.

After you notice its immediate intimidating wide stance, you’re sure to notice it’s decked out in blue camouflage. Do you know what this blue camouflage is called? Razzle Dazzle.

Hmmm…not exactly the name that one would associate with camouflage. Razzle Dazzle sounds more like a broadway term than truck camo, so what gives? Like most reasons behind everything in the military, it’s code. So, put away those jazz hands.

This Razzle Dazzle camo was used to disguise American ship’s speed, direction and profile. Obviously, on land, the blue camo isn’t blending in with much, unless you’re caught in a rainstorm near the ocean, or somewhere between the moon and New York City, but it does look pretty cool. 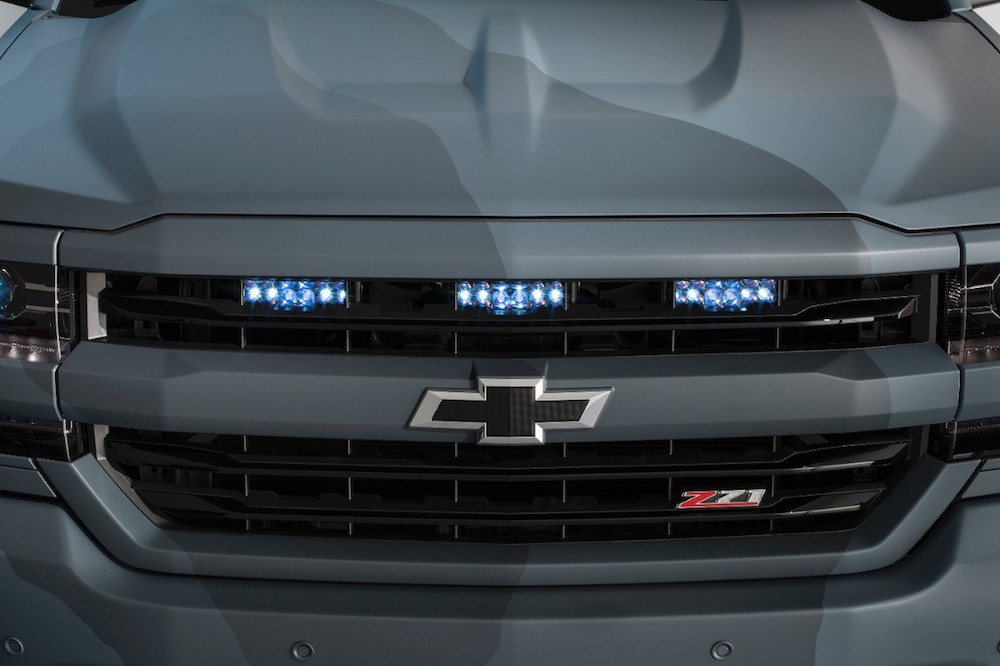 Because it’s not everyday, or even every year that truck manufacturers produce “special concept” pickups, let alone ones that look this good and have so many usable features, it’s likely this limited edition is going to sell out quickly.

Taking full advantage of Chevrolet Performance and GM’s Performance Vehicles and Motorsports, the Special Ops concept is equipped from top to bottom.

A bed-mounted sports bar with LED lights line along the top of the bed-mounted GearOn tiered utility rack storage system with tie-downs and light bars. 6” LED lights illuminate the otherwise blacked out grille that ride on 20-inch aluminum wheels equipped with off-road tires. For good measure, there is an underbody shield/skid plate.

Functional as well as fun, this Silverado gets top performance air induction system along with a free-flowing exhaust and a better brake package than the normal 1500.

Because this is a military inspired vehicle, there are military cues located throughout the cabin including “Ejector Orange” door pulls and glove box handles, along with waterproof seat covers and waterproof floor liners. Keeping with the Razzle Dazzle camo, both the instrument panel and armrests received such treatment, as well. 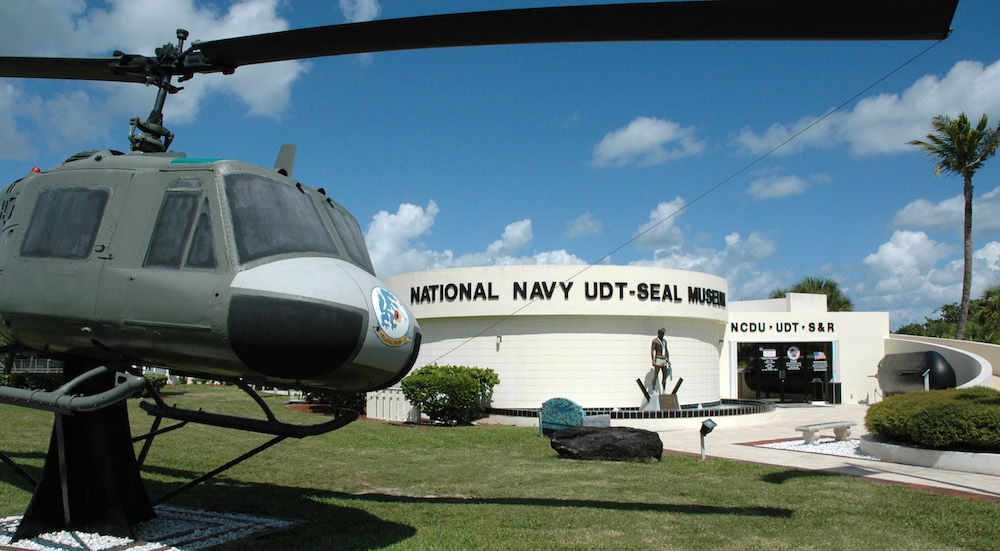 Chevy has already promised to donate a portion of the proceeds from the sales of the limited release Special Ops Silverado to the Navy SEAL Museum. Located in the birthplace of the Navy SEALs, Ft. Pierce, Fla, the museum was founded in 1985 to honor their legacy. It was during WWII that thousands volunteered to train in the facilities at Ft. Pierce in covert warfare and underwater demolitions which was the creation of the Navy’s first special operations unit. Because GM shares in famed WWII history and because supporting American military men and women is so important, this Special Op Concept and donation to the SEALs is a great collaboration to support truly great American heroism.

While this contribution is very important to both GM and the SEALs, it will personally touch so many lives. The Navy SEALs museum are actively involved with and support Trident House Charities which includes scholarships and family support initiatives for those families who have suffered the loss of a family member to combat.

“The partnership will also help us aid the families of the fallen, injured and active duty Navy SEALs through the efforts of our Trident House and scholarship programs,” said Kaiser.

In a show of solidarity and gratitude to all those who have served, past and present, Chevy has expanded their military discount program. Normally it was reserved just for active-duty, reserves, retired personnel and veterans within a year of discharge. However, now the discount applies to all 23 million veterans and their spouses. Understanding that bravery has many faces, Chevy extended their discount to include the spouses because they are an extension of our soldiers and are also need of our strength and support.