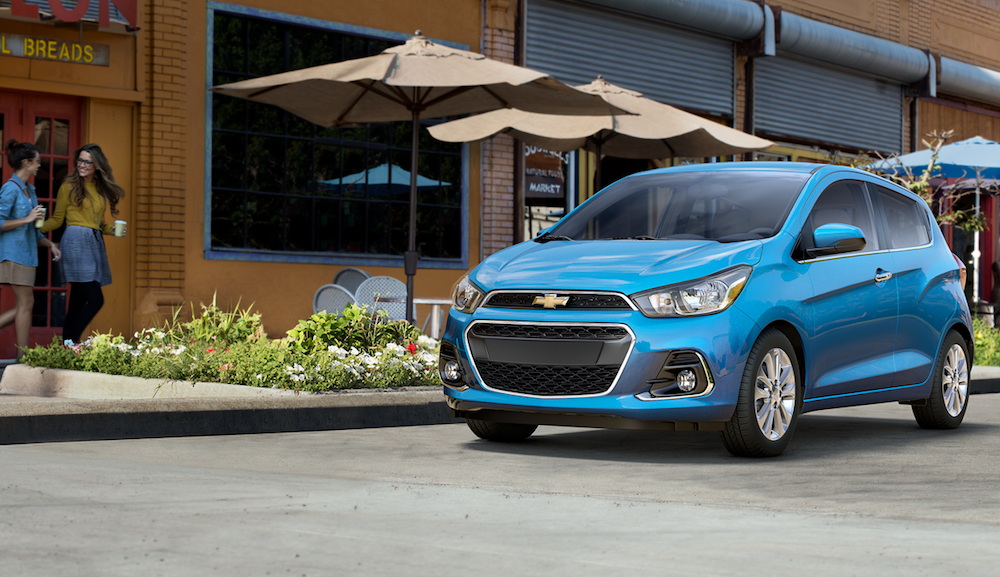 It’s hats off to our college graduates who have worked hard for four years and are now proudly entering the workforce. What better way to celebrate these students than by giving them a new Chevy vehicle? At McCluskey Chevy, your premiere Chevy dealer in Columbus, we suggest four of our 2017 models that will put a smile on your graduate’s face. Better yet, you’ll smile when you learn how affordable they are with a price tag under $20K.

For those millennials who seek a sporty, energy efficient vehicle, our 2017 Spark model offers them a spacious interior, five star safety rating, and excellent fuel economy. Plus the Spark comes in 10 “look-at-me” colors, such as Splash Blue Metallic and Mint, that are sure to appeal to this age group.

Your new graduate will appreciate the 2017 Chevy Spark for its ease and agility around city streets. It’s been equipped with a 1.4-liter four-cylinder engine providing 98 horsepower and 94 lb-ft of torque.

As the parent of the graduate, you’ve chosen the Spark for its safety and driver assist features. The base Spark LS is equipped with 10 airbags, Bluetooth phone connectivity, Chevy’s MyLink infotainment interface with a 7.0-inch touchscreen and a USB input for Android Auto and Apple Carplay interfaces, a rearview camera, and OnStar with 4G LTE for three months. If you choose the LT model, your graduate will enjoy six-speaker audio (up from four) with satellite radio, power windows, some chrome exterior trim, cruise control, power door locks, keyless entry, steering-wheel controls for the audio and phone systems, and 15-inch aluminum wheels.

Here at McCluskey Chevy, our advice to new graduates is: go conquer the world and have some fun with your new favorite small car – the 2017 Chevy Sonic. If your graduate requires advanced safety features, innovative technology and an available turbocharged engine, as well as space, the 2017 Chevy Sonic should be your choice. You can choose between either a sedan or hatchback style, both offer a 60/40 split-folding rear seat. The hatchback style also offers 47.7 cu. ft. of cargo space with the rear seats fold down. No matter if your new graduate has sports equipment, extra luggage, or supplies for a new job position, post-graduation, the Sonic has the space for it.

Cruising through the streets of Cincinnati or wherever their first job takes them, the 2017 Chevy Sonic will get them there with its available 1.4L turbocharged engine and available 6-speed manual transmission. They’ll be happy about its EPA-estimated 38 MPG highway as well, giving them the perfect combination of efficiency and power.

Now that we’re in the beginning of summer, your new graduate will appreciate zipping around city streets or navigating winding roads with either their new 2017 Cruze Sedan and first-ever Cruze Hatchback. When you present them with this gift, let them know that the Cruze is Chevrolet’s best-selling car around the world, with 3.5 million sold since it went on sale in 2008.

Of course, all new graduates are familiar with and demand technology in their vehicles. The 2017 Chevrolet Cruze comes standard with Chevrolet MyLink that features a 7-inch color touchscreen with available built-in 4G LTE Wi-Fi, Apple CarPlay, and Android Auto. A myChevrolet mobile app allows your son or daughter to start or stop the engine, lock or unlock the doors, send directions to the navigation system, view diagnostic information, and set parking reminders from the convenience of their mobile device.

Don’t worry, Mom and Dad. The 2017 Cruze comes with lots of available safety features. These include 10 airbags (including passenger and driver knee airbags), a rearview camera, StabiliTrak electronic stability control with traction control and rollover mitigation, and an OnStar Guidance plan free for three months. If you want to beef up the safety features even further, you can add Rear Park Assist, Side Blind Zone Alert with Lane Change Alert, and Rear Cross-Traffic Alert, along with Forward Collision Alert, and Lane Departure Warning with Lane Keep Assist.

If your new graduate requires more space and a larger vehicle, perhaps the 2017 Chevy Trax SUV at our Columbus showroom is more their style. Chevy designers have given the Trax a fresh appearance and a new premium interior.

The Trax’s Ecotec 1.4L turbocharged four-cylinder engine is backed by a six-speed automatic transmission. Its engine is rated at 138 horsepower and 148 lb.-ft. of torque between 1,850 and 4,900 rpm.

The new grad will appreciate its onboard technology. The MyLink interface is standard equipment on all models, and is now compatible with Android Auto and Apple CarPlay.

If your son or daughter has lots of college friends or is moving into their first apartment, the Chevy Trax will be right at their side. It has the cargo versatility for whatever lifestyle they choose. This small SUV offers eight seating configurations and room for objects up to eight feet long with the front passenger seat folded down.

At McCluskey Chevrolet, your Chevy dealer in Columbus, please bring your recent grad to our showroom and take a test drive in any of our affordable and safe 2017 models