Automotive comparisons usually have more to offer in the way of contrast. But, when it comes to the 2016 Chevy Equinox and 2016 GMC Terrain, the differences between them are minor. The most notable difference concerns aesthetics and styling. Where the Equinox looks slightly more refined, the Terrain has a more rugged edge.

Both vehicles come similarly equipped and both hold the distinction of being the only two midsize SUVs awarded the Institute for Highway Safety’s highest rating for small overlap front crash tests. Add that to the rest of their strong safety accolades and both cars offer matched security and reliability.

The 2016 Chevy Equinox and the 2016 GMC Terrain are both scheduled to arrive at your local Chevrolet dealer sometime during late fall of this year.

Common Ties Between the Equinox and Terrain

These two crossovers remain true to their tested and proven capabilities and equipment. Not much changed for the new model year because consumers have proven that significant changes were not needed.

Drivetrains carry over from earlier productions with options that include the fuel-efficient 2.4-liter four-cylinder, generating 182 horsepower, for a fuel economy of 32 highway miles per gallon, available in both front and all-wheel drive. For added power and towing tasks, the 3.6-liter V6 engine produces 301 horsepower and is able to tow a maximum 3,500 pounds.

With their shared drivetrains and safety ratings, the choice between the two comes down to trim levels, and each vehicle presents plenty of features across a price range that industry experts predict will be class-competitive. 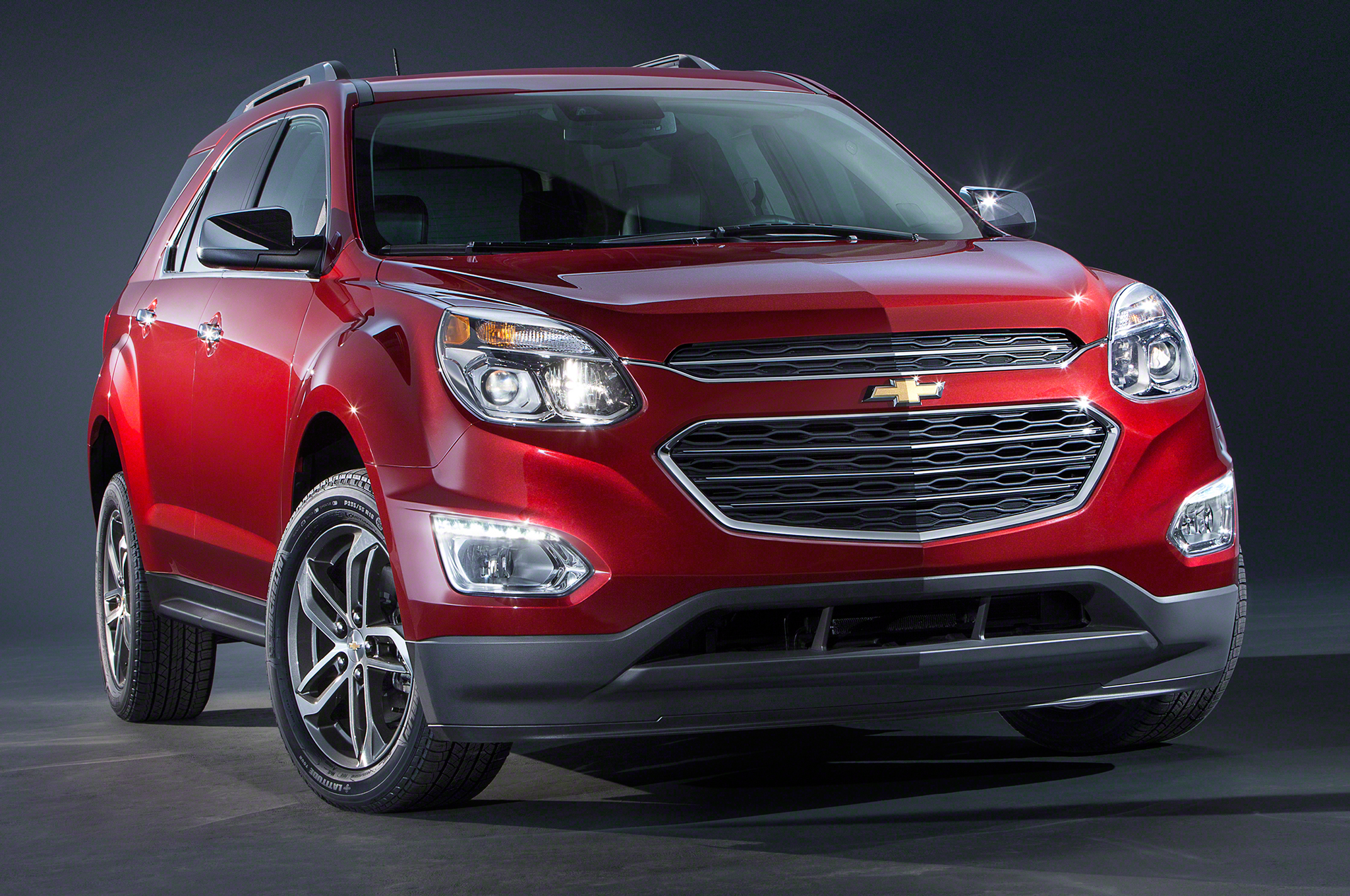 The slightly more demure of the two, the 2016 Chevy Equinox comes in four trim levels: the L, LS, LT, and LTZ. Of the four options, the L offers front-wheel drive only, while the rest have available all-wheel drive. Consumers looking for the more powerful  towing capability of the 3.6-liter engine will have to restrict their search to the LT and LTZ models.

For the more economical L and LS models, Chevy has extended its 7-inch Color Touch radio, equipped with Bluetooth technology, while the higher-end LT and LTZ trims benefit from Chevy My Link with improved connectivity.

All 2016 Chevy Equinox vehicles boast 31.4 cubic feet or cargo space, which jumps up to 64 cubic feet after seatbacks are folded down. Lots of storage options throughout the cabin allow for organization of large and small items, and Chevy has even created available tablet holders which can be attached to the back of the front seats.

When it comes to safety, already impressively ranked, every 2016 Chevy Equinox comes standard with a rearview camera, and a bevy of additional active-safety options, depending on trim level. Valued for its spacious interior, comfortable and quiet ride, perhaps it is no wonder that the Chevy Equinox remains one of Chevy’s best-selling vehicles, second only to the its full-size Silverado pickup trucks.

Where it is expected to best the 2016 GMC Terrain is in price. Automotive experts project that the Equinox will come with a smaller sticker, edging out the Terrain when it comes to overall affordability and value. Last year’s 2015 Chevy Equinox was priced at $22,120, while the 2015 Chevy Terrain started at $24,070. 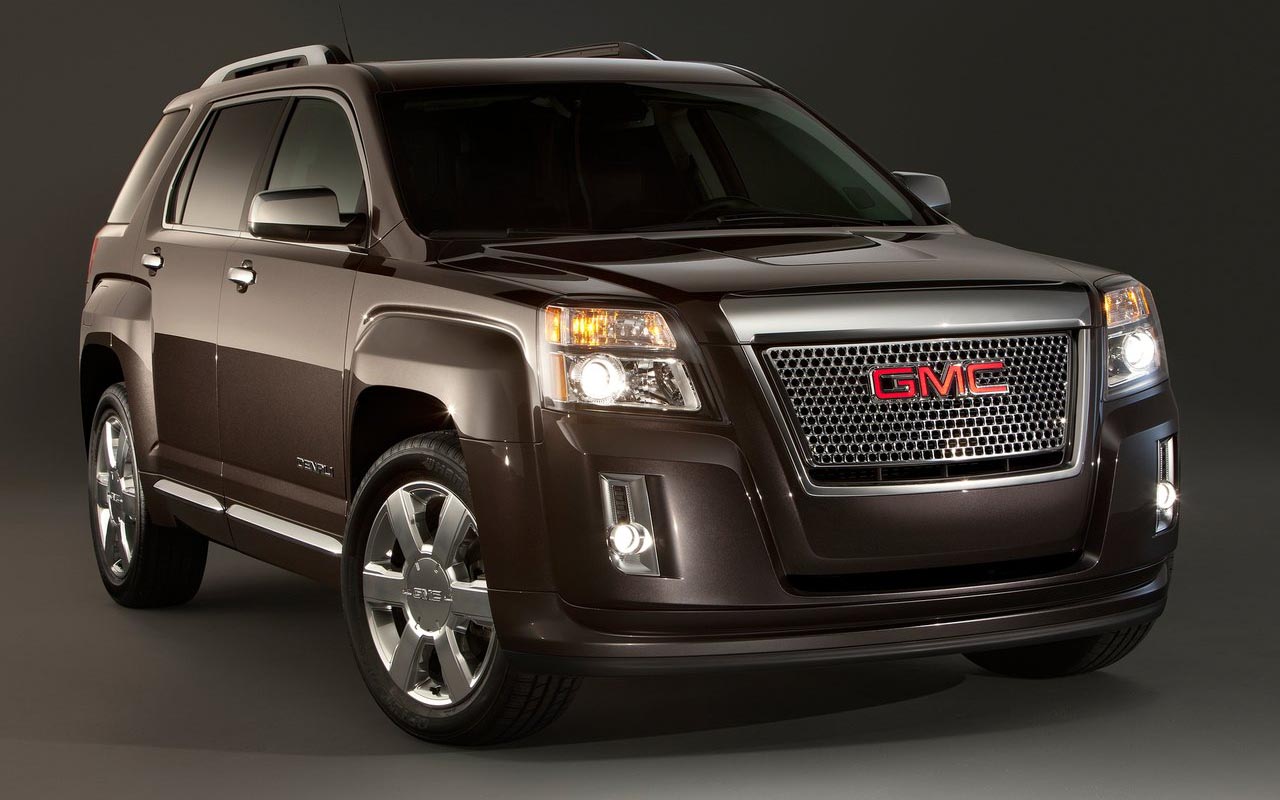 Between the two, the GMC Terrain is the higher-end, upscale option, compared to the Chevy Equinox, and this is particularly true for consumers who opt for the Denali trim level.

Covered in chrome and brimming with soft-touch and leather-trimmed interior features, the 2016 Denali Terrain remains outfitted with dual-flow dampers, and adds a new feature in the form of a programmable power lift gate, which lets the driver determine its height. The Denali also sports extra safety features, which include the available forward collision alert, as well as lane departure warning, both of which were once only offered on luxury vehicles.

For the 2016 model year, the GMC Terrain gets two new exterior colors in White Frost Tricoat and Crimson Red Tintcoat in addition to its already extensive color palette. Wheel options include new 18-inch aluminum wheels with an available 19-inch aluminum wheel design, exclusive to the Denali.

The 2016 GMC Terrain lineup will start arriving at dealerships this fall. Reported MSRP starts at $24,070 for base trim levels, with the upscale Denali commanding a starting price of $35,490.

Similar to the Chevy Equinox, the terrain is GMC’s second best seller, coming in behind the brand’s full-size Sierra pickup truck.

These two vehicles are so similar in specs and safety, the ultimate choice for consumers will be left to their own automotive cosmetic preferences and the overall cost of the vehicle after options.

No matter which of these crossover vehicles you ultimately choose, the Chevy Equinox and GMC Terrain are ideal cars for busy families. Capable, safe, and affordable, both models offer plenty of options and customization possibilities, while maintaining their reputations for reliability and comfort.

The 2016 Chevy Equinox and 2016 GMC Terrain are both backed by General Motor’s warranty, which extends coverage for drivetrains over five years or 60,000 miles, including roadside assistance and transportation, along with two complimentary service visits during the first two years of ownership.

Take them both for a test drive at your trusted Chevrolet dealer and let your experience behind the wheel determine your ultimate purchase.