Why the 2017 Chevy Suburban Is More Than an Intimidating Ride 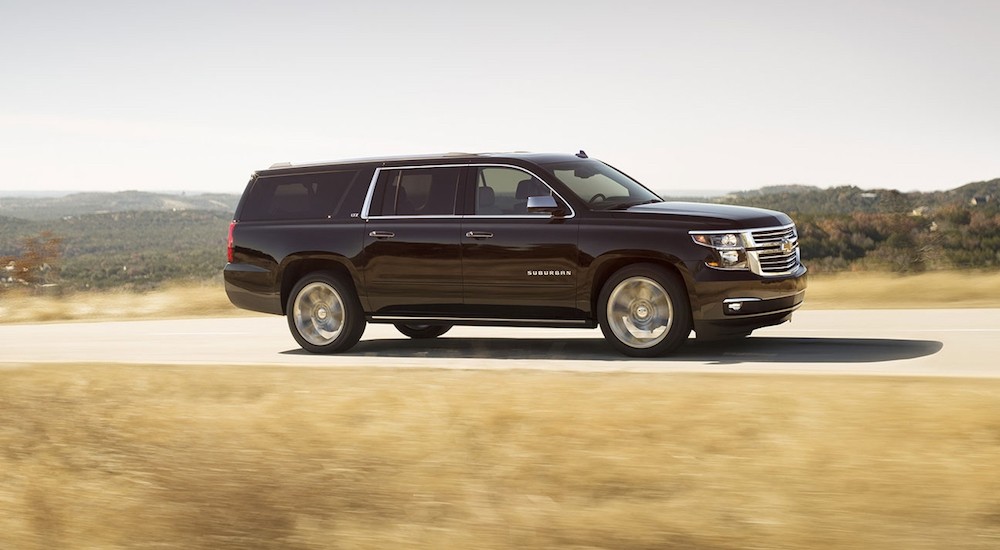 I generally operate with the mentality that you should go big or go home. Well, if you’re currently in the market for a SUV, you’re unlikely to find a larger offering than the incredible 2017 Chevy Suburban. The giant SUV isn’t solely one of the most intimidating, hulking vehicles in the entire class. Rather, it’s also one of the most capable and accommodating rides, providing drivers with incredible power, surprising efficiency, innovative technology, and reliable safety functions.

If you’ve been considering a trip to a Chevy dealership, wait several extra minutes and explore why the 2017 Chevy Suburban is more than just an intimidating ride…

The 2017 Chevy Suburban is truly a massive vehicle, so it shouldn’t be all that surprising that the SUV delivers a whole lot of cargo room. The 39.3-cubic-feet of space behind the third row should be more than enough room to fit any type of luggage or school projects. However, when owners fold the second and third rows, they can unlock an incredible 121.7-cubic-feet of space. That’s more than enough room to fit smaller pieces of furniture, and it will surely make your vehicle the go-to when it comes to transporting school projects or sports equipment. There’s even a hidden storage spot included in the center console, meaning drivers will have a place where they can hide their more valuable cargo.

Best of all, Chevy makes it incredibly easy to store all of that cargo. The power-release second-row seats and the power-fold-flat third-row seats means you won’t have any issues configuring your interior as you’re looking to fit both cargo and passengers. Furthermore, the inclusion of the motion-sensing power liftgate will prevent you from having to fumble with your keys while your hands are full, thus maximizing convenience.

Considering the size of the 2017 Chevy Suburban, drivers can definitely expect the utmost power from their vehicle’s engine. The 5.3-liter EcoTec3 V8 engine delivers an incredible amount of muscle, as drivers can capitalize on the 355 horsepower and 383 pounds-feet of torque. These specs ultimately influence some of the truck’s other capabilities, including the astonishing 8,300-pound towing capacity. At the end of the day, you’d be hard pressed to find similar capabilities elsewhere.

However, perhaps the most notable feature of this specific unit is the efficiency. Thanks to the inclusion of a lighter suspension, drivers can expect a best-in-class 23-mile-per-gallon highway fuel economy. While you’ll be spending plenty of money on your new SUV, you can expect to save a chunk of change at the gas pump. Meanwhile, your fellow SUV owners will surely be visiting those gas stations much more frequently.

Of course, it’s 2017. Since the 2017 Suburban is one of Chevy’s premier offerings, it shouldn’t be all that shocking that the SUV is chock full of technological amenities. The star of the interior is the Chevrolet MyLink system, which provides quick and easy access to a number of applications that influence both convenience and entertainment. Thanks to the inclusion of the Apple CarPlay and Android Auto compatibility, drivers will also have the chance to connect their smartphone to the system, allowing them to utilize many of their gadget’s basic functions.

While the front passengers will be appreciating the MyLink system, the younger rear passengers will enjoy the Rear-Seat Entertainment System. With video monitors in the second and third rows, occupants can watch their favorite movies (the system is compatible with Blu-ray) or play their favorite video games (thanks to the HDMI connection). Plus, due to the digital headphones, those front passengers won’t be distracted by the accompanying sound effects.

Perhaps the best technological inclusion is the 4G LTE Wi-Fi. With the ability to connect up to seven different devices, occupants can consistently stay connected to the internet. Plus, thanks to the USB ports, they’ll always be able to keep their preferred gadget charged at all times. In other words, if you’re seeking technology from your new SUV, you won’t have to look much further than the 2017 Chevy Suburban.

The 2017 Chevy Suburban is a perfect choice for families, and a big reason for this sentiment is the SUV’s array of safety functions. These various inclusions will play a significant role in helping drivers stay out of harm’s way, assuring that they don’t find themselves in a collision.

The Low Speed Forward Automatic Braking and the accompany Forward Collision Alert can detect an impending crash, and the unit will subsequently alert the driver via audible and visual cues. If the driver doesn’t respond, the unit is even capable of manipulating the brakes to help lessen (or avoid) the collision. If drivers prefer, they can activate the Safety Alert Seat, which will provide the driver with slight warning vibrations instead of those audible/visual alerts.

Meanwhile, inclusions like the Rear Vision Camera will let the driver monitor everything that’s happening behind their vehicle, allowing them to anticipate an unexpected fender bender. The Rear Cross Traffic Alert will also help in this situation, as the technology can notify the driver when an object is about to cross behind their SUV. Meanwhile, the Rear Park Assist will help guide the driver into a spot, while the Side Blind Zone Alert will alert the driver when someone has unexpectedly snuck up beside them.

Even the Driver Information Center and accompanying Head-Up Display could be considered a notable safety function. The unit displays an array of useful information right in front of the driver, including speed, fuel efficiency, and vehicle diagnostics. Usually, drivers would have to strain their neck to see this information, or they’d have to take their eyes off the road as they utilize their touchscreen. Now, thanks to this inclusion, drivers can have this information displayed right in front of them.

All of these functions will combine to keep drivers safe and secure, confirming the Suburban’s status as an excellent family SUV