If you live in or around Cincinnati, OH and are looking for a used Chevy Traverse, then you are in luck! Here at McCluskey Chevrolet, we specialize in all things Chevy-related. We don’t just keep new models in stock; we also have a vast selection of pre-owned vehicles to choose from, and the used Chevy Traverse can often be found on our lot. Throughout the years, there have been numerous changes made to the Chevy Traverse. However, when questions are posed, such as "How much can the Chevy Traverse tow?" the answers are surprisingly straightforward.

The Chevy Traverse is a full-size SUV, which means that no matter the year or model, it is a capable and strong vehicle. Most of the Traverse models on the used market will fall into the first generation, which ran from 2010 to 2017. And within that time, every Traverse was equipped with the same engine, a robust 3.6-liter V6 mated with a 6-speed automatic transmission. 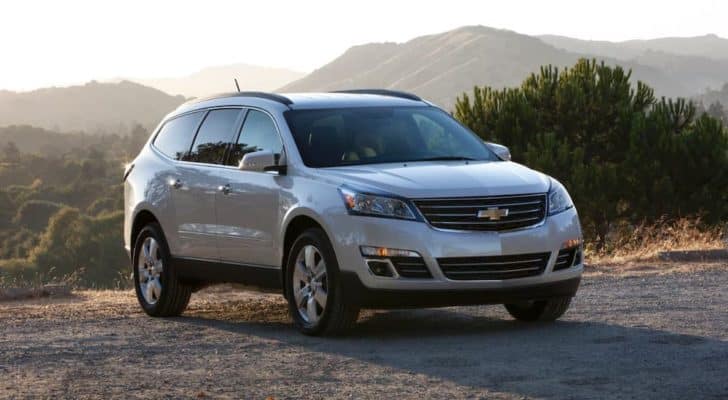 This complete configuration allows the Traverse to produce 281 hp and 266 lb-ft of torque. And in turn, it can tow up to 2,000 pounds. With that all said, most of the Chevy Traverse models found on the used market will tow just that: an impressive 2,000 pounds. But the power to tow does not end there.

If you are lucky enough to find a newer Traverse, like a 2018 or 2019 model, you will get even more strength. Powered by the same standard 3.6-liter V6 engine, the performance has increased due to the new 9-speed automatic transmission. This upgraded performance allows the Traverse to produce 310 hp and 266 lb-ft of torque.

Although, you may also find a Traverse from these years with a turbocharged 2.0-liter 4-cylinder engine that generates 257 hp and 295 lb-ft of torque. These are both solid engines, which results in high towing capacities. The less powerful engine can tow up to 1,500 pounds, while the stronger engine, when properly equipped, can tow up to 5,000 pounds.

All in all, the Chevy Traverse can tow between 1,500 pounds and 5,000 pounds depending on the year and configuration. It is a strong vehicle, but there is much more to this full-size SUV than just its strength.

The first-ever Chevy Traverse was unveiled at the Chicago Auto Show in 2008, but the vehicles didn’t show up on dealership lots until 2010. And, these days, you can still sometimes find first-generation used Chevy Traverse models here at McCluskey Chevy. Let's take a look at what you can expect to find in these models.

Earlier first-generation models are available in a trio of trims. The base is known as the LS. Riding on 17-inch wheels, it features full power accessories, air conditioning, and OnStar telematics. As for entertainment, it comes with satellite radio, a 6-speaker stereo, a CD player, and an auxiliary jack.

Next, the mid-level LT trim is split into sub-trims known as the 1LT and 2LT. The 1LT comes with heated side mirrors and 18-inch alloy wheels. Rear parking sensors have also been added as well as a power-adjustable driver’s seat and a leather-wrapped steering wheel. If you find a 2LT model, it will include tri-zone climate control, a rearview camera, a power liftgate, and a 10-speaker Bose stereo.

Lastly, the top-of-the-line LTZ trim gets 20-inch wheels and remote-start engine technology. It even comes with leather seats that are heated and ventilated for comfort all year long. Bluetooth connectivity for phone and audio functions is also included. These are very rare features that you typically can’t find on vehicles that are over five years old. But you can when it comes to the Traverse, and the features only get better when you consider newer models.

Later Years in the First Generation

If you come across a used 2013 Chevy Traverse, you may notice a few changes. For instance, these models have a revised grille, tailgate, taillights, and front fascia. The exterior looks quite different. Also, a touchscreen interface has been added for a more advanced infotainment system. Everything else, though, carries over from the earlier models.

Used Chevy Traverse models from the 2014 model year have newer safety systems included along with an additional USB port. Forward collision alert will notify you of any oncoming obstacles. The lane-departure warning system will alert you if your vehicle begins to drift out of the designated lane.

Finally, first-generation Chevy Traverse models from 2016 and 2017 come with more advanced infotainment features. These include a 4G LTE Wifi hotspot on the LT trim levels and above. Higher trims also feature 20-inch aluminum wheels for a more sophisticated look. Also, the LTZ trim has been renamed. It is now called the Premier. In all, these first-generation Traverses are very advanced for their time, making them the perfect used-market buy.

Finding a used Chevy Traverse from the second-generation may pose more of a challenge, and they are a bit more expensive than the first-generation models. However, they will have better and more advanced features, so they may just be worth the extra search and cash.

There are seven trims to pick from in the second generation, and the first is called the L. Rolling on 18-inch wheels, this base model includes heated side mirrors, xenon headlights, and LED daytime running lights. Cloth upholstery covers the cabin, and the infotainment interface is displayed on a 7-inch touchscreen. Operating with Bluetooth, Apple CarPlay, Android Auto, and a 4G LTE Wifi hotspot, this base trim is very well equipped.

Next, the LS adds USB ports and tablet mounts to the second row of seating. Then, the LT Cloth trim gets roof rails and enhanced side mirrors with integrated turn signal indicators. Also, the driver’s seat is power-adjustable at this level.

Moving up to the LT Leather trim will get you a navigation system along with an auto-dimming rearview mirror, a premium Bose stereo with ten speakers, a 120-volt outlet, and, of course, leather upholstery. If that isn’t enough, it also comes with a larger 8-inch touchscreen, heated seats, remote start technology, and a power liftgate. Blindspot monitoring, rear parking sensors, and rear cross-traffic alert are also included.

If you want something sportier, the RS trim is a great option. Equipped with the 4-cylinder engine, it gets better gas mileage. It also comes with a black grille, 20-inch wheels, and most of the interior features from the LT Leather trim. Stepping up to the Premier model gets you auto-dimming side mirrors, LED headlights, and a hands-free power liftgate. On the inside, you will find cooled seats in the front, heated seats in the back, and driver memory settings.

The cream of the crop is the High Country model. This is a rare one to find on the used car market. So, if you happen to come across one, grab it! It features an AWD system and a panoramic sunroof. Also, advanced safety systems such as adaptive cruise control and automatic high beams are included. So if you want a fully-equipped used Traverse, consider one from the second generation. Though, any used Traverse would be a good purchase.

If you are ready to start your search for a used Chevy Traverse, we at McCluskey Chevy are here to help. You can check out our online inventory, give us a call, or just stop by. We are ready to get you behind the wheel of your next vehicle, no matter what you are looking for. And with one of the best service centers in the area, we will continue to serve you for years to come. So what are you waiting for? Contact us at McCluskey Chevy in Cincinnati, OH, today. We look forward to meeting you.