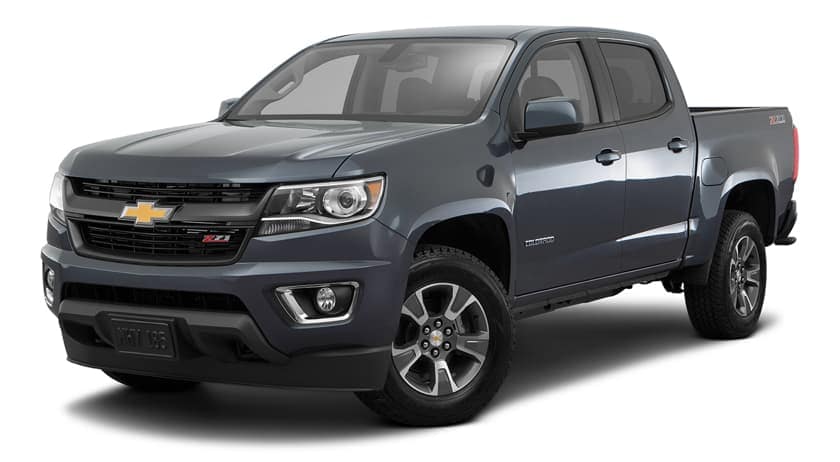 At McCluskey Chevrolet, we wanted to stock the 2016 Chevy Colorado in Cincinnati, OH for our customers. Why? Because, it’s a vehicle that’s created some serious waves (and upsets) in the market over the past couple of years — in a good way. For Chevy, at least. The 2015 model won Motor Trend’s Truck of the Year Award for its overall exceptional quality in design and performance. When Chevy revamped the model for 2016, it won the same award again, thanks to the addition of the diesel model. The great design didn’t change, nor did the material quality and feature-laden cabin.

In 2016, the Chevy Colorado is perhaps the best mid-size truck on the market. Let’s take a look at why Motor Trend loves this truck so much, and how it’s managed to hold the Truck of the Year title for two years running.

When Chevy gave the Colorado an entire overhaul for 2016, the new-for-that-year mid-size truck managed to steal the show in terms of design, performance (handling in particular), and just a great build quality overall. Therefore, when it won the award again, even the folks over at Motor Trend were in disbelief. How did a vehicle that just came off a fresh-faced redesign win the award, again. Well, when Chevy dropped that Duramax diesel engine I mentioned earlier, it upset a lot of the competition. Not only did it win the Colorado the award for a second year in a row, but it also became the only mid-size truck with diesel power. That means increased towing and fuel-efficiency. It increased the performance of the Colorado so much, that it also started popping out best-in-class ratings left and right for towing, torque, and fuel economy.

Apart from the engine, nothing else major changed for the Colorado in 2016. It got support for Apple CarPlay, and the LT and Z71 models got an enhanced driver information display. Other than that, it retained the same extraordinary handling, ride quality, and design that made the 2015 version an award recipient.

The 2016 Colorado is the alpha predator in the mid-size truck market. 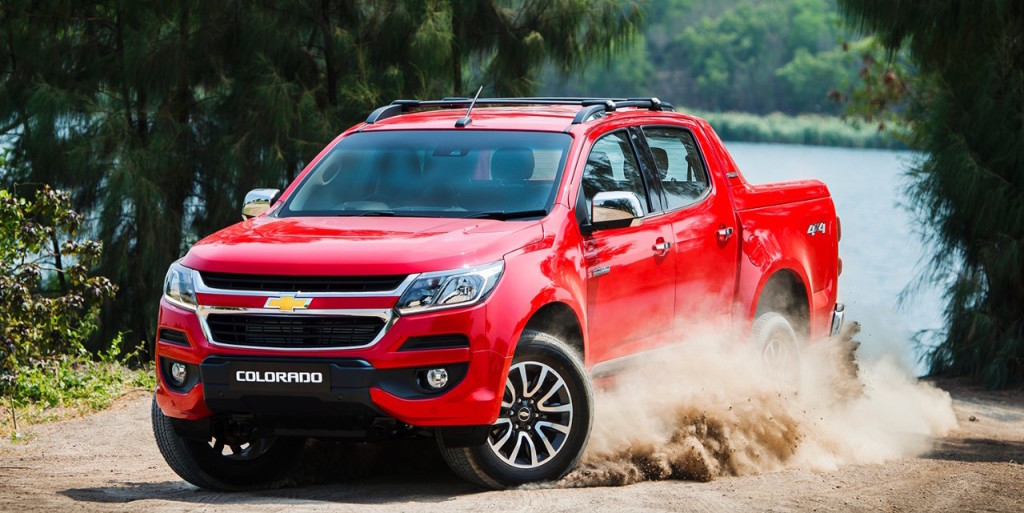 The sole reason the Colorado won the 2016 Motor Trend Truck of the Year Award twice in a row is all thanks to the turbocharged 2.8-liter four-cylinder Duramax diesel engine, optional on the LT and Z71 crew cab configurations. This engine kicks out 181 horsepower and 369 lb.-ft. of torque, allowing the Colorado to tow 7,700 pounds. Apart from getting best-in-class torque and towing, it also lands best-in-class fuel economy, with EPA ratings listed at 22 mpg city and 31 mpg highway (2WD). Making it even more impressive, the 4WD Colorado diesel is able to crush the (previous) segment leader — the Tacoma — in acceleration. With a zero to 60 mph time of 7.5 seconds, that’s 0.7 seconds faster than the Tacoma is able to merge on the highway.

While the diesel Colorado steals the show for 2016, and is well worth the extra money, we can’t forget about the other two gas-powered engines. The 2.5-liter inline four-cylinder engine puts out 200 horsepower and 191 lb.-ft. of torque, and gets up to 19 mpg city and 26 mpg highway (2WD). It has a towing capacity of 3,500 pounds when a four-wheel drive model with this engine is properly equipped.

For those seeking more power, the 3.6-liter V6 will slake your thirst. It cranks out 305 horsepower and 269 lb.-ft. of torque, and gets up to 18 mpg city and 26 mpg highway (2WD). Naturally, the towing capacity is increased significantly to 7,000 pounds, which isn’t bad for a midsize truck.

The handling and ride quality of the Colorado can’t be touched by the competition. Even without the diesel engine, the 2015 Colorado was still the better choice according to Motor Trend. That handling and lighter-than-air ride quality carries over to 2016, and it simply outperforms and outmaneuvers all other trucks in the mid-size segment.

The Colorado is a mid-size pickup truck that’s offered in three different cab styles: two-seat, four-seat extended-cab, or five-seat crew cab. Depending one which style you pick, the performance will alter slightly. But, still not enough to be concerned about. If you like to get the best performance possible on your vehicle, then the two-seater is obviously the way to go. It comes in four different trim levels: Base, Work Truck (WT), LT, and range-topping Z71. Depending on which model you pick, the truck will look a bit different. For example, while the Base and WT trims look a bit plainer, the LT and Z71 are going to look more upscale or rugged. Thanks to different tires, badging, roof-racks, off-road lights, or any other features that help set the LT and Z71 trims apart.

More important than the Colorado’s good looks is its exceptional design. Without a good design, a truck is worthless. In the case of the Colorado, Chevy needed to give it a design that was both strong enough to work, and light enough to help the diesel engine nab that best-in-class fuel economy. It also needed to look handsome, while still remaining true to the rugged truck roots Chevy is known for. Somehow, Chevy nailed it perfectly with the 2015 redesign.

The end result is a truck that the editors at Motor Trend themselves said works like a full-size truck, but handles, rides, and acts more like a mid-size crossover SUV. Therefore, you’re getting the best of both worlds when picking up the 2016 Colorado. Chevy was able to make the design lighter by providing it a segment-first aluminum hood, which is a great way to help save fuel without compromising the integrity or safety of the vehicle.

Bottomline: the Colorado performs just as good as it looks, which means it absolutely blows even the top-tier competition away.

Perhaps the biggest strength the Colorado has in the cabin is the ergonomic design. With a lot of full-size trucks — even mid-size trucks — there are typically hard-to-reach areas or buttons. Maybe you feel like the glove box is miles away, or the center console is too big to comfortably rest your arm.

It’s all about function above aesthetics when it comes to Chevy, but the engineers and designers made sure the Colorado has both. The narrower center stack has a lot to do with the enhanced ergonomics. Since it’s smaller, it shifted all the controls closer to the driver. Even still, the buttons aren’t cramped, and controls don’t get mixed up. The buttons on the touch-screen are large and obvious, so those with big hands won’t feel like they’re always going to hit two at once. Combine that with the perfectly-sized center console (about the same size as the center stack), and the driver has effortless arms-reach access to every control on the inside of the truck.

Materials quality is not necessarily exciting, but that doesn’t mean it’s poor. Vinyl upholstery on the Base trim is much more durable (and easier to clean) than cloth, which is something competitors still haven’t figured out with their trucks yet. But if cloth is desired, then the WT trim is the way to go. Moving onto the LT and upgrading to the Luxury package gets you a mixture of durability and comfort, thanks to leather upholstery, and a leather-wrapped steering wheel that comes standard. Heated mirrors, four-way power front passenger seat, driver/passenger power lumbar adjustment, and heated front seats which are also available on the Luxury package make everyone’s life a little more comfortable. The Z71 gets exclusive cloth/leatherette upholstery for a unique appearance. Good-quality hard plastic is always a double-edged sword in truck cabs: it makes sense since it provides better durability than leather — which is the most important thing for a truck — but it might leave some consumers wishing there was more.

All-in-all, materials are high-quality, but nothing special. The ergonomic cabin provides the driver with ease of access to every function inside the cabin, and it’s loaded with so many technology features, that there’s almost too many to name.

At McCluskey Chevrolet, we stock plenty of 2016 Colorados to go around, along with hundreds of other new high-quality Chevy models. But, thanks to its rapidly gaining popularity, and rising gas prices, the Colorado sales are rising. It’s a truck that handles like a crossover SUV, but works like a full-size truck. Light enough to be fuel-efficient, but not light-enough to skimp on capability. The interior and design are some of the best in the segment, and the 2016 Colorado is rife with technology features.

Interested? We don’t blame you. McCluskey Chevy always eagerly awaits the opportunity to greet customers with a smile, and our entire facility from sales to service is staffed with employees who are ready to help in anyway they can. We have a level of refined professionalism that’s lacking in other dealerships in the Cincinnati, OH area. We’re a certified Chevy dealer for a reason, after all. A big part of that reason is because of the pride we have for Chevy models and in our ability to consistently create customer satisfaction.