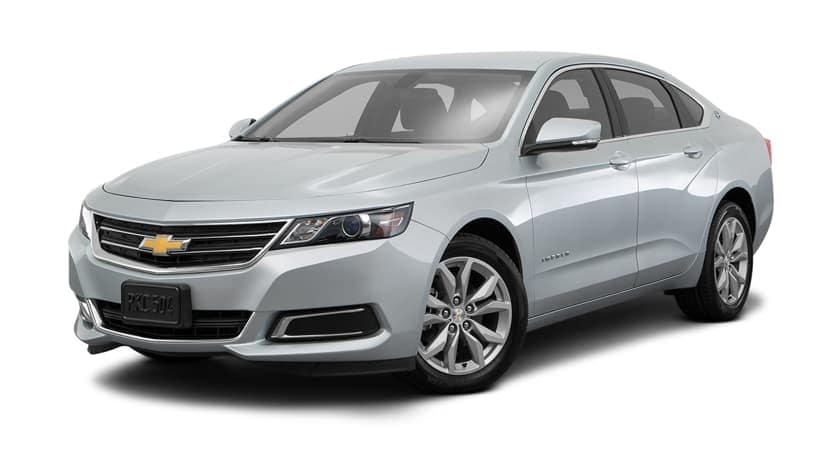 Welcome to the latest model of the Chevy Impala, the manufacturer's longest-running sedan, now in its 10th generation. Not only is it the ideal vehicle for those with SUV fatigue, but it’s perfect for the family that needs an upgrade from their compact vehicle.

Although the basics of the 2014 Impala redesign that kicked off a maelstrom of full-sized sedan envy haven’t changed, the overall features and attributes have been tweaked. As such, the Impala of 2018 offers three trims. The first, LS, is the basic option and provides drivers with MyLink infotainment, rearview camera, noise cancellation, and more. The other trims, LT and Premier, offer a plethora of luxury add-ons such as heated mirrors, heated driver and front passenger seats, leather steering wheel, LED running lamps, and more.

Expect to pay in the high $20,000s for the base LS trim, which is highly competitive for the full-size sedan market. Though it won’t overpower anyone with off-the-chart additions, it quite handily provides all the necessary elements a large sedan buyer could need. As expected, the MSRP increases into the low -$40,000s range as buyers include more upgrades and change trims. However, because the Chevy Impala tends to hold its resale value (and offers 28-30 MPG standard), owners can expect the investment to pay excellent dividends with regular maintenance and TLC. Thus, its future trade-in value should be appealing from a financial perspective.

Looking for OnStar capability? You’ll get a free subscription to the service no matter which of our dealerships you purchase your new 2018 Chevy Impala in Cincinnati, OH, dealership.

In addition to safety features including traction and stability control, the Chevy Impala 2018 version has no fewer than 10 airbags. Add to this lane-departure warning, rear cross-traffic notifications, and blind spot monitoring, and it’s easy to see how the 2018 Impala snagged five out of five stars overall from the National Highway Traffic Safety Administration (NHTSA).

Plus, the Chevy Impala 2018 comes with a six-month complimentary subscription to the renowned General Motors OnStar program which offers automatic response in the event of a collision.

The only safety feature that may be lacking, depending upon some drivers’ penchants for control? All-wheel drive isn’t a possibility when purchasing an Impala. However, this is a small item to give up for all the extra amenities and benefits the Chevy Impala brings to the table.

As a nod to the technological needs of today’s drivers and passengers, the 2018 Chevy Impala makes a built-in hotspot available. The onboard Wi-Fi can handle up to seven device connections at a time, and 2018 Impala owners get a three-month or 3GB trial choice.

In terms of entertainment, expect the performance and sound of the basic LS trim to impress. But for real intense music lovers, the Premiere trim with its Bose sound quality is the way to go.

Under the hood, the 2018 Impala gives a powerful display of prowess with the help of one of two engines. The first is a 2.5L four-cylinder model that aims to reduce unnecessary sipping of fuel; the second, a 3.6L V6, is what Chevrolet calls the top “naturally aspirated” among similar engine varieties. Either engine will perform responsively, giving the driver just enough power to smoothly navigate traffic in town or on the freeways.

Ironically, drivers who claim that it steers like a Chevy Camaro wouldn’t be far off the mark. In fact, the 2018 Chevy Impala has the same basic (but modified for a full-sized sedan) electric steering as is found in its sister “muscle car.” Expect dutiful performance, but be aware that the Impala isn’t 100-percent fond of heading straight up mountains without a bit of noisiness as the grade increases.

The good news for anyone concerned about visiting the gas pumps too often is that the Impala has a reliable, attractive miles-per-gallon highway limit of around 28-30. This keeps it from becoming a gas-guzzler, but owners won’t feel like they’ve given up comfort or cabin spaciousness in the process.

In its class, the Chevy Impala of 2018 holds up to any rivals and achieves high marks for its appearance, performance, and generally strong engineering. Anyone who has ogled an Avalon or drooled over a Maxima definitely needs to take an Impala for a road trip. It has the capability to turn its competition’s brand loyalists into Chevy believers.

It only takes one glance at a Chevy Impala to understand how it’s stood the test of time since its first iteration in 1958. Since then, Chevrolet has instinctively evolved this classic automobile, adding modern touches throughout the years. Is it any wonder that the 2018 version is as contemporary as it gets, with strong lines and an eye-catching chassis? Sure, it hasn’t changed much since 2014 with the unveiling of its 10th generation, but that doesn’t mean it doesn’t lead the charge among full-size sedans with serious style.

What should buyers expect from their Chevy Impalas?

Starting on the outside, the 2018 Chevy Impala’s base trim offers an attractive chassis with 18″ wheels and a 17″ wheel spare. The Premier offers 20″ tires, but there’s a noisy price to pay for the extremely attractive appearance they offer. LS colors include Black, Blue Velvet Metallic, Nightfall Gray Metallic, Silver Ice Metallic, and Summit White. The LT and Premier add Cajun Red Tintcoat, Graphite Metallic, Iridescent Pearl Tricoat, Mosaic Black Metallic, and Pepperdust Metallic to the mix.

Expect high-performing halogen headlights to automatically sense when to turn off and on, eliminating the worries so often associated with leaving car lights on and draining the battery. As the trims change, so do the amenities and wheel size, but the basic shape of the Impala remains classically Chevy.

The interior of the Chevy Impala is built for the comfort of both driver and passengers. Bucket seats in the front feature cloth or leatherette, and adjust for maximum ergonomic support of the head, neck, and back. Carpeted floor mats in the front and back add a touch of warmth and practicality; they can be removed for quick and easy cleaning.

An intuitive driver information center offers easy navigation of everything from fuel consumption to vehicle alerts. And a keyless entry and start, ensures no fumbling and a more streamlined start to any trip.

Hauling cargo isn’t a problem for the Chevy Impala. Despite being utterly roomy inside for the benefit of passengers, it also has a substantial trunk. Toss in everything needed for a family vacation or weekend in the mountains. As the biggest sedan in the Chevy line of vehicles, the Impala’s a constant household favorite.

McCluskey Chevrolet is proud to provide car buyers in the Cincinnati, OH, region with the latest Chevy automobiles, including the 2018 Chevy Impala. Not only are we committed to answering your questions about this sleek, powerful, dependable product, but we’re ready to hand you the keys for a test spin around the area!

Come find out why McCluskey Chevrolet is the Chevy Impala enthusiast’s choice of car dealerships. Want to talk about pre-owned vehicles or leasing possibilities? We’re happy to discuss your needs in our comfortable, modern showroom. It’s time to come home to a Chevy and find out why America can’t get enough of the Impala and other Chevrolet vehicle models.