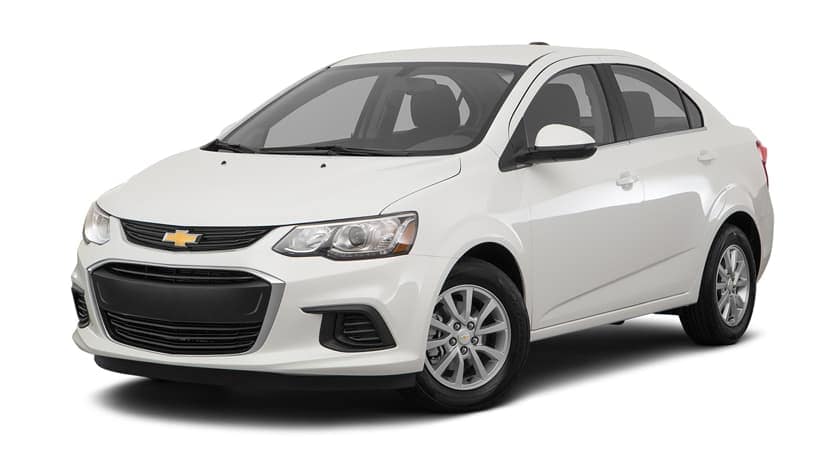 You’re sure to notice the plethora of smaller cars dotting the roadways. Intrigued by the idea of getting into a vehicle with a tight turning radius, and that makes parallel parking along tight city blocks a breeze? Check out the 2018 Chevy Sonic in Cincinnati, OH.

This breed of Chevy offers you everything you appreciate about the brand, from its appearance to attention to technical details. As the middle child between the Spark and Cruze, it’s just the right size for many people and offers a surprisingly get-up-and-go engine.

Interestingly, the Chevy Sonic has appeal across the generations, especially among younger professionals looking for a vehicle with a sweet price tag. Starting as low as just above $15,000 for manual transmission (add a Driver Confidence Package to most trims for just under $500 more), you can easily enjoy a smaller than average auto loan with a 2018 Chevy Sonic in your garage. Prefer an automatic transmission? The price moves up, so be sure to ask about your selections.

You have plenty of choices when you pick out a 2018 Chevy Sonic, starting with the trim. In the sedan model, you can get an LS, LT or Premier. The hatchback, which costs more, comes in LT and Premier only. If you’re hemming and hawing over which version to choose, just ask your sales team member to let you take both for a spin. Neither the sedan nor the hatchback are innately better; they’re both developed from the same responsible, reliable Chevy engineering.

Plan to move into the future of compact car breeds without giving up the safety and tech amenities you need. Test drive your next ride: a Chevy Sonic.

Safety might as well be the Chevy Sonic’s middle name because it performs well in safety tests across the board. This gives you peace of mind whether you’re motoring solo or carrying precious cargo. No fewer than 10 airbags located around the compact car keep everyone secure. And when you’re driving, the stability control and anti-lock braking mechanism keep you riding smoothly.

Like to have a little notification if you’re getting too close to the side of the road, or if an object is closing in fast in front? Upgrades in Sonics include alert systems that cover both of these conditions.

Like all Chevys, you can expect the 2018 Sonic to woo you with its Apple CarPlay system among other higher-tech options. Just open your door and–surprise!–you have a seven-inch screen just waiting for you to play around. Forget about driving with a Bluetooth in your ear; just have hands-free conversations using your nifty, nimble, ultra-modern dashboard.

You can also use your Sonic as a hotspot, getting Wi-Fi wherever you go. In a nutshell, you won’t have to give up an ounce of the infotainment you love in Chevrolet products.

Seeking a car that affords you the opportunity to use OnStar? Yep, the Sonic can do that, too.

Is it chock-full of gadgetry? Nope. But it has enough to keep you satisfied whether you’re on a daily commute or a visit to the beach.

Although the Chevy Sonic won’t win any track records, it does provide a smooth ride, which is a nod to its 1.8-liter engine with four cylinders. Opt for a 1.4-liter turbocharged engine that take you to your end-spot faster if you’re looking to rev up your cruising game. Either way, you can expect to enjoy fueling up less often with a combined miles-per-gallon around 35.

So what does the engine feel like when you’re twisting and turning along the streets of your town or weaving in and out during rush hour traffic? Quite simply, it’s nimble and turns beautifully, allowing you to comfortably and confidently steer to any destination. In fact, many critics have raved about what a fun compact car it is to drive, and they appreciate its suspension. (You can also upgrade to a different suspension if desired.)

At the same time that it’s giving you so much, the Chevy Sonic isn’t taking up too much room anywhere. That can be a true benefit if you live or work in an area where tiny parking spaces are the norm. Drivers in larger SUVs may just experience a flush of envy when they realize you haven’t had to give up much to get such a big-personality vehicle.

In terms of upgrades, expect a litany of options because the standard Chevy Sonic is a bit spartan. This doesn’t come as a shock to anyone who is accustomed to buying from the Chevy Sonic line-up, but newcomers to the Sonic fold might find it unusual. Still, it’s a way for Sonic to make sure that buyers at many income levels can afford to have their own set of great new wheels.

Unlike other compact cars that sometimes lack trendiness or good looks, the Chevy Sonic has been built for style. It’s everything you could want from a spunky, sporty vehicle that gets terrific mileage anywhere you go.

On the exterior, you can expect a vehicle that knows how to maximize the real estate it’s been given. Whether you get a sedan or a hatchback model, you can expect to enjoy a vehicle that’s nice-looking. Even without all the bells and whistles of some other subcompacts, its body shines with pizzazz and uniqueness. And don’t forget that you have tons of colors in the 2018 Chevy Sonic models, including cajun red tintcoat, orange burst metallic, ivy metallic, and a host of other strong-personality hues. Basically, you can probably find your favorite shade among the listing of Sonic tints in 2018.

Inside, the Sonic is suitable for people who don’t demand tons of leg room, so leave the basketball team behind if you have a squadron of folks topping out at nearly seven feet. However, for most people, the Sonic is completely the right size and surprisingly sophisticated. At the same time, don’t mistake this mini–it has some serious chops when it comes to offering more than meets the eye. You’ll not only have room for cargo–just fold the rear seats and you suddenly have 47.7 cubic feet awaiting your stuff–but also for friends and family members.

If options are your thing, you can upgrade to the LT sedan, which features higher-end interior fabrics and comes with a six-speaker system installed. On the Premier, expect to be able to choose from anything from fog lights to a heated steering wheel. Again, the decision of how to outfit your Sonic is up to you.

No, it’s not an SUV, but it doesn’t have to be. It’s its own class of automobile.

McCluskey Chevrolet understands its buyers’ needs, which is why we’ve been the dealership for people in and around Cincinnati, OH, for years. Customers trust us to give them the best prices and offers in the business, all done with our stellar level of service.

Whether you need a new vehicle for your teenage or college-age child, or you just want to add a new member to your home fleet, bring your car dreams to McCluskey. Our team members are happy to show off the latest cars, including the 2018 Chevy Sonic. Plus, we have a rotating supply of tremendous used cars to ensure you make a match.