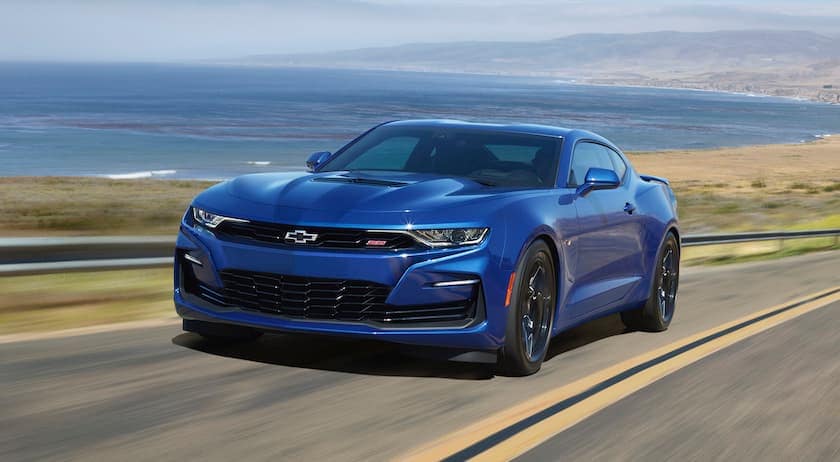 Nowadays, few vehicles focus on the performance aspect of the driving experience. As automakers pay attention to factors like fuel economy, comfort, and high-tech features, others, like Chevy, instead opt to create vehicles that include all of these great attributes in a top-notch performance vehicle. If you’re the kind of driver who wants a car that will tear off the starting line, and provide unprecedented handling, Chevrolet’s latest 2020 Chevy Camaro is certain to be within your wheelhouse. The Chevy Camaro is a legendary vehicle, with a history dating all the way back to the 1960s. The 2020 Chevy Camaro may have an aged record, but it is still the epitome of modern muscle, sporting incredible machinery beneath the hood and providing the kind of driving experience that is bound to impress a wide spectrum of drivers. When you visit our Cincinnati auto dealership, you’ll be greeted by a wide selection of some of the latest and greatest vehicles on the market and a team of auto professionals who go above and beyond for each customer. While the 2020 Chevy Camaro is but one in a fully-stocked state-of-the-art showroom, it deserves focused recognition for everything this sporty muscle car brings to the table.

The 2020 Chevy Camaro serves as clear evidence that the muscle car is alive and well. While the market may be crowded with zippy hybrid engines and four-cylinder SUVs, the 2020 Chevy Camaro acts as an obvious standout with its raw power beneath the hood. Customization, and more important, engine customization, is a huge deal with the 2020 Chevy Camaro, as potential buyers will find a dizzying eight different trim options to choose from including the 1LS, 1LT, 2LT, 3LT, LT1, 1SS, 2SS, and ZL1. That’s not to mention that each of these trim options come with a convertible or coupe variant, lending more to the customizability factor.

The base, 1LS trim option, which is estimated to start at at $25,995, is powered by a 2.0L turbocharged, 4-cylinder engine, producing 275 horsepower and 295 lb-ft worth of torque. This baseline turbocharged 4-cylinder is matched alongside a 6-speed manual transmission which gives drivers a truly hands-on driving experience. Match that 6-speed manual with a pavement gripping rear-wheel drivetrain, and a reasonably low-profile, and you have a standard vehicle that easily outperforms its competitors. What makes even the base model of the Chevy Camaro truly impressive is the sturdy bones that prop up this powerful sports car. Using premium suspension specs, which can be found on top-performing vehicles, the Chevy Camaro stays grounded while at the same time providing a seamless driving experience through and through.

This superior performance is only compounded as you move up the trim option ladder. Engine builds cover the spectrum of cylinder sizes, including a 355-horsepower 3.6L V-6 engine which puts out 284 lb-ft worth of torque. According to testers, this V-6 engine can launch the Camaro from 0-60 in 5.0 seconds. While this may sound like quite the impressive build, it is far from the end of the line. Take a step up to the SS or LT1 model, and you’ll find a 6.2L V-8 engine tucked into the chassis, which churns out 455 horsepower and 455 lb-ft worth of torque.

At the top of the line in the ZL1 model, you’ll find a true supercar. Sporting a supercharged 6.2L V-8 engine, this peak performing Chevy Camaro can produce 650 horsepower and 650 lb-ft worth of torque. And yes, this top-model Camaro is beyond fast, erupting from 0-60 in as little as 3.5 seconds. This top-performing Chevy Camaro is in a direct challenge with world-class performance vehicles and truly takes off like a bullet. Couple this much engine power with the option of either a 10-speed automatic or 6-speed manual transmission and you’ll find a heart-racing ride that is quite difficult to compare.

While performance is the obvious highlight of the 2020 Chevy Camaro, it isn’t the only thing drawing muscle-lovers to this impressive vehicle.

Comfort was a top-focus for Chevy when designing the 2020 Camaro. The Chevy Camaro is a four-seater sports car, meaning you won’t have to worry too much about transporting additional passengers at high speeds. Base models may offer some pretty standard upholstery, but the front Recaro bucket seats make for a huge plus, especially considering that they can be heated or cooled. As mentioned prior, the 2020 Chevy Camaro can be purchased in a convertible body style, making for some pretty sporty comforts, and an added level of thrill to the driving experience.

The added bells and whistles only improve from there, adding features that can launch your driving experience to new heights. Take, for instance, the upgraded 8.0-inch infotainment touchscreen, and heads up display in the 2SS model. These features are coupled with dual-zone automatic climate control, a nine-speaker audio system designed by Bose, and a rear-camera mirror.

Upgrade the 2020 Chevy Camaro from there, and you can expect to find superior navigation, a power sunroof, remote start, a wireless smartphone charging pad, and a Performance Data Recorder, which allows you to track just how well the Camaro is doing on the road.

When it comes to safety, supercars, muscle cars, and all-around performance vehicles tend to fall a bit short. Some automakers focus on performance to the point that other important factors fall to the wayside, one of them being active safety features. Automotive safety tech has changed a lot over the years, moving from simple protective measures to features that take the wheel and hope to avoid dangerous collisions altogether. While other top-performing vehicles may miss the mark in terms of active safety tech, the Chevy Camaro lives up to the challenge.

The base model of the Chevy Camaro may start small, offering a suite of airbags and a rearview camera, but things improve dramatically from there. Move up to the 2SS or ZL1, and you’ll find more standard safety gear including rear park assist, blind-spot monitors with rear cross-traffic alerts, and forward-collision warnings at no extra cost to you. All models even come with Teen Driver mode, which lets you customize certain settings to promote safe driving and limit other features the vehicle offers, all while putting the information in a handy, in-vehicle report.

While comfort, safety, and interior tech were all clear focus areas when designing the various feature packages for the 2020 Chevy Camaro, Chevrolet also made an added effort in including performance upgrades. It may seem wild to upgrade an already high-performing vehicle, but Chevy was unafraid in pushing the envelope just a bit further.

Some of these add-ons can only be found in upper trim options, but for some drivers, they may be well worth the additional cost. Take, for instance, Magnetic Ride Control dampers, which truly brings your driving experience to the next level. Combine these ride control dampers with a dual-mode exhaust system, a performance-grade suspension system, electronic limited-slip differentials, and 6-pistol front and 4-piston rear Brembo brakes, and you have a performance car that redefines the meaning of a performance car.

Surprisingly enough, these features can even be expanded upon at the top of the line in the ZL1 trim option. Drivers of the best of the best Chevy Camaro can expect to find suspension, brake, and cooling upgrades, a clever Performance Data Recorder, forged aluminum wheels, Eagle F1 Supercar performance tires, performance dampers, adjustable camber plates, and a carbon-fiber hood insert and rear wing.

All of these features working in concert create a thrilling drive, one that delivers superb speed, acceleration, and an overall roaring performance that you simply will be hard-pressed to find anywhere else.

Visit us at McCluskey Chevrolet!

At McCluskey Chevy, we understand that some drivers want more than a car that acts as just a form of transportation, they want a brilliantly designed piece of machinery that generates a truly one of a kind driving experience. Fortunately, you can find just that behind the wheel of the 2020 Chevy Camaro, which we offer in our Cincinnati showroom. Our team of auto dealers can schedule you in for a comprehensive test drive, where you’ll be able to get up close and personal with this top-notch performance car. If you enjoy the ride, we’ll walk you step by step through the car buying process to help you find the deal that matches your budget and automotive needs. No matter if you’re looking for performance, fuel economy, or smart auto features, we have what you need for the best ride possible. At McCluskey Chevy, we strive every day to create the best dealership experience possible and help you find a car that fits you perfectly.