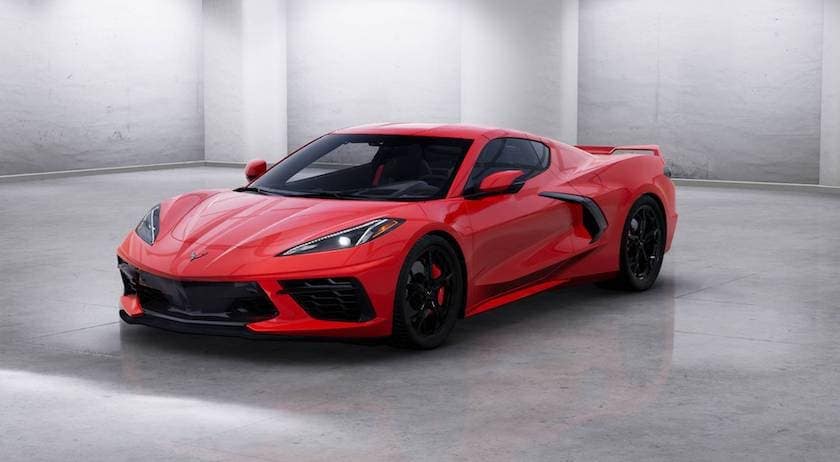 For decades, Chevy fans have heard rumors and dreamed of what a mid-engine Corvette might look like – their patience has paid off because it is finally a reality and it is gorgeous. The 2020 Chevy Corvette will be talked about by most people because of the new position of the engine and how that has shifted its overall look and design, but it is so much more than that. From the inside out, every aspect of this new Corvette has been improved, re-imagined, and redesigned to create one of the most beautiful and powerful American sports cars ever to grace the road.

While all of the details have not yet been released, there is plenty of information now available from Chevrolet to get a full sense of what the 2020 Corvette will have to offer. From classic touches like the Targa roof to new aspects like the shorter nose and improved handling from the mid-vehicle engine placement, every detail of the 2020 Chevy Corvette is spectacular. The exact starting price has not been released yet, but we do know that it will start at $59,995 and will be surprisingly comparable to the ZR1 in terms of 0-60 time.

The C8 or 8th Generation Corvette looks to set a new high-water mark for American sports cars with innovations in design and engineering that will push every other auto manufacturer to rethink the cars they make. The first models will be publicly available starting in 2020, with variations and sport options expected to follow shortly after. Now that your appetite is sufficiently whetted come to McCluskey Chevy in Cincinnati, OH, to learn more and reserve your 2020 Corvette today!

While the engine is important for any sports car, with the next-generation 2020 Chevy Corvette, it is an even bigger talking point than with just about any other car out there. The first big detail is that the engine is now positioned with a mid-vehicle design, placing it just behind the cockpit of the vehicle. With any sports car, the engine is the heaviest component in the car – so traditional front-engine designs put all that weight at the nose of the vehicle, and that has to be compensated for with other elements.

The mid-vehicle design of the 2020 Chevy Corvette, however, puts all that weight in the middle toward the rear of the vehicle. That decision in and of itself gives the new Corvette better handling and feel than previous years could offer. Beyond that, however, the engine has also been upgraded and improved and is now referred to as the LT2, an incredible improvement over the previous LT1 in the C7.

In part, that faster speed off the line is thanks to the new 8-speed dual-clutch transmission in the C8. While manual-transmission fans will certainly be sad to see that go, the dual-clutch is definitely fast and a joy to drive. Plus, there are steering-wheel paddles for manual shifting; while that might not satisfy every manual transmission fan out there, it at least offers a compromise for those who want it.

Once we stopped drooling over the details of the powerful engine inside the 2020 Chevy Corvette, the outside is the next thing we noticed. The classic shape of a Corvette Stingray has a long nose with a distinct design. Now that the engine is located behind the cabin, the long nose has been substantially shortened. This immediately gives the new Corvette a distinct look that sets it apart from the models that came before.

This is definitely a point of contention among some classic Corvette fans – but the performance that this new design offers cannot be argued with. The shift in the engine has pushed the cabin more than a foot forward and significantly shortened the nose of the vehicle. This means the driver has a fantastic view of the road in front and far better control than ever before.

The front curves of the Stingray design are still present, however, and once the initial shock of the redesign wears off, the elegant shape of the 2020 Chevy Corvette is striking. Massive intakes give the entire vehicle a distinct supercar look, and a clear cover behind the cabin showcases the location and beauty of the new LT2 engine. A small front compartment in the nose of the vehicle provides a little cargo room, with a rear trunk that offers enough room for a pair of golf bags or the removable roof panel. Yep – the 2020 Corvette still has a Targa roof, so you can enjoy the feel of the wind as you zip down the road.

The interior of the 2020 Chevy Corvette is an absolute master-class in aesthetic details that enhance the experience without ever getting in the way. Just behind the wheel is a 12-inch digital driver display with all the information you could want on it. There is also an 8-inch Infotainment display between the seats with all the connectivity you could want, and a vertical row of climate controls and options that give you functionality without obstructing your view or cluttering the main dash.

Even the steering wheel has been designed for optimal performance and a unique experience – with a flat top and bottom for comfort and visibility. Since the engine has been shifted back behind the cabin, all of these interior features have been lowered, so they do not obstruct your view as the driver. Audio controls and large shift paddles can be found on the steering wheel too, so you always remain in control of everything you need without taking your hands off the wheel.

Lesser designers would probably be content to shift to a mid-engine design and call it a day, but the talent at Chevrolet pushed things even further. An improved version of Chevy’s Performance Data Recorder lets you track information about your vehicle, including lap-time recording if you hit the track so you can easily see how you are performing. Even if you are not one for taking your car onto a track, the data recorded by this system makes it easy to follow how you are driving and make adjustments as necessary to get the most out of your car.

One of the most impressive new tech features with the 2020 Chevy Corvette, however, is the GPS-enabled nose-lift feature. This lets you program locations that have areas where you need the nose to be lifted, such as your driveway at home or speed bumps that you encounter on a regular basis. The car’s system will keep track of these locations and automatically lift the nose of the vehicle almost 2-inches up as you approach them. With the ability to track up to 1,000 locations via GPS, you will never have to worry about scraping the underside of your Corvette against your driveway again, nor let a bump in your local shopping center’s parking lot take the nose out from under you.

Visit us at McCluskey Chevrolet!

When it was first teased early in 2019, we were already excited about all of the prospects that a mid-engine Corvette had to offer. Now that we know more, however, we are only more excited than ever before to see the 2020 Chevy Corvette in person and watch as it dominates the road. This is a sports car unlike anything we have seen from Chevrolet before, and clearly shows their commitment to powerful vehicles that give the driver an experience that cannot be found anywhere else. Chevy’s passion and drive to be the best automaker in America can be clearly seen on every inch of the new Corvette, and driving it is an experience that simply cannot be described, it must be felt.

With all of the excitement generated about the 2020 Chevy Corvette, it is going to be difficult to keep in stock, especially at first. If you are interested in getting a new Vette for yourself, come and visit us at McCluskey Chevy to learn more about it and reserve your vehicle today. Here at McCluskey Chevrolet, we sell the best Chevy vehicles seven days a week, with a full parts and service center available to all of our customers for years after they sign their paperwork. Come to McCluskey Chevrolet and check out a Corvette or any other Chevy vehicle today; we will not rest unless you are completely satisfied with your experience and drive away happy.