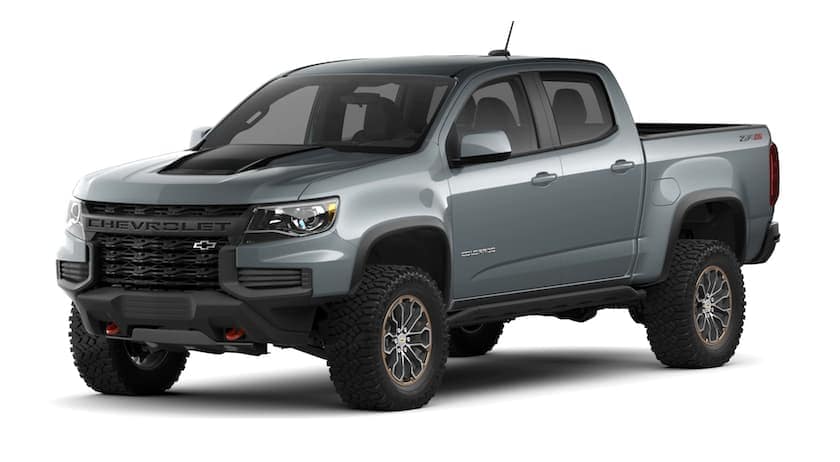 The calendar may have just turned over to 2020, but that doesn't mean it's not time to begin looking forward to new models from Chevy. This includes the upcoming 2021 Chevy Colorado. The recently announced pickup has the kind of performance any off-road or towing enthusiast will want while maintaining the smaller body perfect for city drivers or for light-duty work. More information will come out in the coming weeks regarding the new 2021 Chevy Colorado, but if you've been eyeing a new light-duty pickup that delivers serious performance numbers, your wait for the 2021 Colorado is almost over.

Chevy has not yet announced what the expected MSRP will be on the pickup. The exact numbers will be made available the close it comes to an official release later this spring. However, as the 2021 Colorado remains in the current generation, the price will likely remain similar to what the 2020 Colorado MSRP is.

General Motors hasn't officially announced all the specs and trim options for the 2021 Colorado. That information will be made available in the coming weeks. However, it has started to inform dealerships around the country to expect a late spring 2020 release date. This means if you're looking to swap in your current set of wheels for the perfect summer vacation pickup, you won't need to look long. So if the look of the new Colorado already has you salivating, you'll have your truck appetite satisfied in just a few short weeks. Keep checking in with us for the latest information on the official release date and model specs as it becomes available.

The 2021 Chevy Colorado will use three engine options. This includes the 2.5L I4, a 3.6L V6, and a 2.8L Duramax turbo-diesel I4. These are the same engines used in the current 2020 model. Chevy has not yet announced the specific performance numbers (while the same engine there usually is a small boost, especially in torque) for the engines; however, it is possible to get a firm understanding of each engine and the towing potential by looking the 2020 model. These are benchmark numbers, so the 2021 Colorado could boost both engine numbers and towing by a small amount.

The 2020 Colorado's standard engine is a 2.5L I4 engine that produces up to 200 horsepower and 191 lb-ft of torque. It also can tow a max of 3,500 pounds. With this engine, drivers could expect fuel economy ratings of up to 20 miles per gallon in the city and 26 miles per gallon on the highway.

The 2020 Colorado's second engine offering is a 3.6L V6 engine that performs well with a horsepower rating of 308 and 275 lb-ft of torque. With this engine under the hood of the Colorado, drivers can tow up to 7,000 lbs with no problem. You can also expect an estimated fuel economy of 18 miles per gallon in the city and 25 miles per gallon on the highway.

What About the Diesel Engine?

For drivers who want a diesel offering, the 2020 Colorado can come equipped with a 2.8L Duramax turbo-diesel engine. This engine can perform well with up to 181 horsepower and an unbeatable 369 lb-ft of torque. With this engine, drivers are able to tow a staggering 7,700 pound and have an incredible fuel economy of 20 miles per gallon in the city and 30 miles per gallon on the highway.

For 2021, drivers will love having one of these three powerful engines under the hood of their Colorado. Between the V6 and the diesel engine, there is something for everyone. The 2021 Colorado is sure to be a hit on and off the pavement with these numbers to back it.

The 2021 Chevy Colorado will have a number of new external design features over what was available on the 2020 Colorado. This includes a redesigned grille. The new grille pulls inspiration from the Silverado, using the aggressive black grille and the "CHEVROLET" name stamped into it. The pickup will also come standard with 17-inch wheels to help give it a wider, menacing stance. The pickup also has three new paint colors to choose from. The Z71 and the ZR2 trims will also come with a new Sand Dune Metallic color option.

Chevy wants to make sure everyone knows the difference between each trim. That is why every trim will come with its own unique grille and product badge. For the WT and LT trims, a gold bowtie will be pressed into the grille, while the Z71 will have a black logo.

The ZR2 has always been the performance, off-road trim of the Chevy Colorado. The 2021 model will come with several new features to help enhance the driving experience. This includes a wider open grille that is larger than Chevy has ever put onto a Colorado before (this makes it look that much closer to the Silverado). It will have red tow hooks on the front grille that will come standard.

An exciting feature is the skid plates on the 2021 Colorado. The plating was previously used on the ZR2 Bison enhancement package for the 2020 model but is now a standard feature on the 2021 pickup.

The ZR2 trim will come with Multimatic dampers, plus both front and rear electronically locking differentials. The 2-inch lift is back, and there is a 3.5-inch wider track to what the regular 2021 Colorado will run, which helps with stability while off-road while also giving it a more aggressive stance and appearance.

What's New for the Colorado's Interior

The interior of the 2021 Chevy Colorado will look and feel very much like the 2020 model. It is going to come with many of the same features and looks like the 2020 edition. There will likely be a handful of minor tweaks, but for the most part, just like the engines to be used, most of what you find with the interior will reflect that of the 2020 Colorado.

Features in the 2020 Colorado

The 2020 Colorado LT featured a 4.2-inch diagonal color Driver Information Center. This is right behind the steering wheel and allows you to adjust the information put on display, which can include everything from engine temperature to drive mode. It has six airbags, a six-speaker audio system, an 8-inch Chevrolet Infotainment HD color touchscreen, and an available Navigation feature. 4G LTE Wi-Fi comes standard in the pickup as well.

The ZR2 trim comes with several upgrades. This includes wireless charging, power driver and front passenger seat lumbar control, and adjustable interior lighting. Some of the features found on previous trims may be made available on lower trim levels this year. In order to know exactly what will be available on the individual trims, it will be necessary to wait for General Motors and Chevy to announce the exact specs. GM is going through the final stages of testing, so minor tweaks may be made in the next few weeks, but we should know more, including specs and price points, shortly.

For the 2021 model though, the most substantial changes will come with the ZR2 package. While the interior will remain mostly the same, the improved performance features will make it that much more capable of handling off-road situations. We're excited to see all the changes in action and what this truck will do this time around. The ZR2 Bison is already one of the most impressive light-duty trucks in the world. The 2021 model will only improve upon what it is already able to do.

Coming To McCluskey Chevy This Spring

Winter is winding down, and spring is coming up fast. As you gear up for spring cleaning, now is also the time to begin looking for a new pickup. After all, out with the old, in with the new, and the 2021 Chevy Colorado is very much new. While some of the specs and performance features have not yet been announced, with every passing day, more information is sent our way. What we do know for sure is the 2021 Colorado will be available late spring, which gives you that shiny new set of wheels that is ready for every summertime adventure on your vacation bucket list. So if you're ready for a new pickup, the Colorado is ready for you. From Columbus to Louisville, Indianapolis, and everywhere in between, come visit us in Cincinnati at McCluskey Chevy for the latest info on the Colorado. It'll be hitting our showroom before you know it.