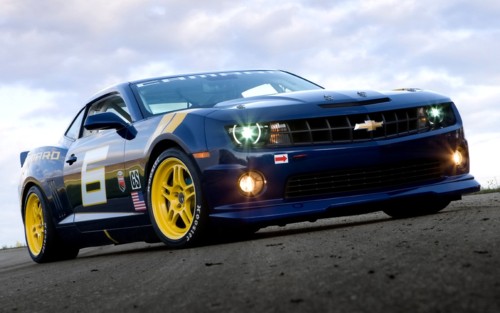 Mecum Auctions, which holds auctions of collector cars, road art, tractors, and celebrity items in auctions across the country will be hosting one in Monterey this August. The auction will feature a plethora of collector cars and road art, and will all be auctioned off in the name of good old fashioned auction fun. While Monterey is on the opposite side of the country from your Cincinnati car dealerships, we are still keeping a close eye on what promises to bring some of the most beautiful collector cars from around the nation.

If you think that Chevrolet is going to miss out on this exciting action – think again! Back in 2008, GM’s High Performance Vehicle Operations unit teamed up with Riley Technologies to create a 2010 Chevrolet Camaro GS Racecar concept, which was showcased at the SEMA show. The car was painted as a look-a-like to Mark Donohue’s 1969 Trans-Am racecar. It also underwent a few mechanical alterations in order for it to be eligible for competition in Grand Am’s Koni Challenge GS class. Among those changes included replacing doors, trunk, hood, and fenders with carbon-fiber replicas, installing aftermarket mufflers, and the addition of differential oil coolers – among many other modifications. The car was also decked out with a close-ratio six-speed manual gearbox, and upgraded brakes.

The auction is to take place August 15-17 at the Hyatt Regency Monterey Hotel and Spa in Monterey, California, and will air in part on Discovery’s Velocity Network. If the estimated price of the Camaro GS of $110,000-$200,000 is out of your price range, feel free to tune in to see just how much the racecar will fetch!

Posted in Car Dealerships in Cincinnati