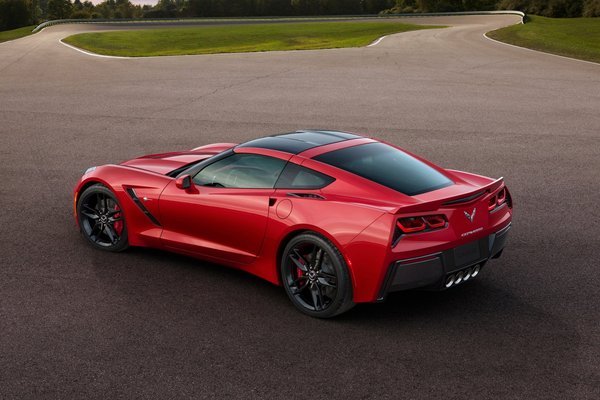 Fuel efficiency and MPGs seem to be on every Americans mind, especially the way the economy has been in recent years. Hummers no longer rule the road, and seem to be about as common as seeing a purple stretch limo cruise the neighborhood. In a world where hybrids and electric cars are becoming the “norm,” Chevrolet is proud to announce that the 2014 Corvette Stingray is the most fuel efficient sports car available on the market, which has made the 2014 Chevy Impala quite jealous of the Stingray’s rock-star status.

The 2014 Stingray gets an estimated 17 miles per gallon in the city, and 29 highway MPGs. The loaded sports car is outfitted with a brand new seven-speed manual transmission, that allows the driver to put the car into Eco mode which disables four cylinders in the engine for better fuel economy when lighter engine loads allow it. This Active Fuel Management system delivers 30 MPG, and when the Stingray is in its default Tour mode it gets 28 MPG, giving the car the estimate of 29 miles per gallon on the highway. Cincinnati car dealerships are happy to report that this increased fuel economy does not mean less power – the Stingray is still packing a 455 horsepower engine, which typically delivers a much lower MPG estimate.

The 2014 version of the Corvette Stingray is due out this fall in a coupe model, and the convertible version is expected to follow by the end of the year. Gentlemen, you can finally go about your mid-life-crisis an a fuel-efficient economically savvy way, and to that we say “VROOOM VROOM!”