When you’re looking for your next four-door sedan, two options available to you are the 2016 Chevy Impala and the 2016 Nissan Maxima. Both are available now as part of next year’s new line of sedans, so there’s updated features, technology, and designs. Each of these vehicles has different things to offer for 2016.

When comparing these two vehicles, you’ll want to consider the different features available as well as technology and safety. Of course having a modern design and a well-adapted interior to suit your needs doesn’t hurt either. Know what you value and what you’re looking for when comparing these two new sedans.

Read on to learn which sedan came out the winner when comparing the 2016 Chevy Impala and the 2016 Nissan Maxima.

When it comes to engines, the Maxima and the Impala are nearly matched. The Maxima offers a 3.5L V6 engine while the Chevy features a 3.6L V6. In the Impala, you’ll also have the option of getting a 2.5L 4-cylinder engine that gets slightly better fuel mileage. 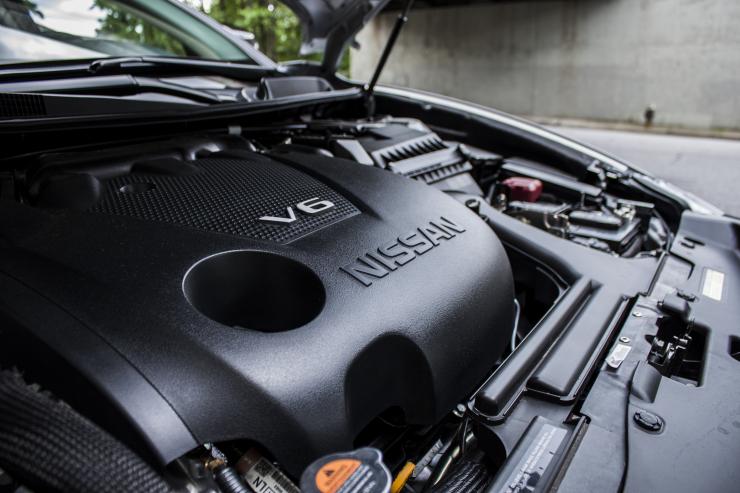 When it comes to fuel mileage, the Maxima and the Impala are also pretty much matched. The Impala’s 3.6L V6 gets an estimated 29 MPG while the 2.5L engine gives you the option of getting 30, which isn’t much of a difference. The Nissan’s 3.5L V6 engine features 30 MPG as well. 60% of the Maxima’s engine has been redesigned to include a high flow induction system and a sport mode in which the steering, shifting, and engine noise are altered. The Maxima also includes Continuously Variable Transmissions (CVT), in which adaptive shift controlling and step shifting are offered to feature better fuel economy and an opportunity for the driver to connect more with the car. The Maxima includes remote engine start from your smartphone. 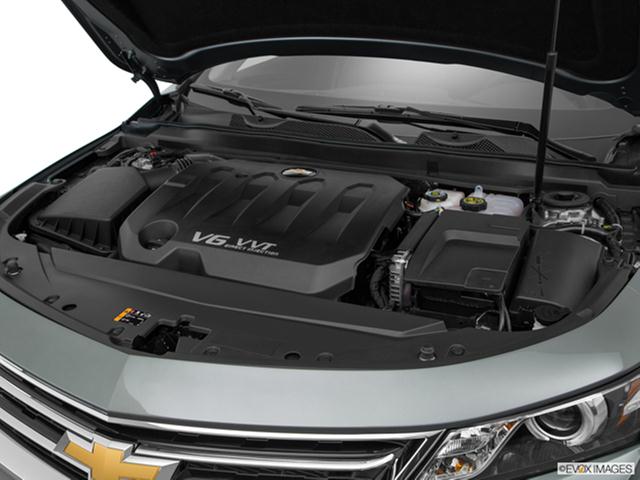 The Impala also offers remote start with the RemoteLink Key Fob System that lets you unlock the car, activate the light and horns, and start the engine from your smartphone. When it comes to horsepower, the Maxima tops at 300 while the Impala pushes it a little further to 305. These full-size sedans are almost matched in all these respects. If there are many similarities under the hood of these two vehicles, then where do the differences lie?

Each of these vehicles is featuring some pretty sporty colors for 2016. The Impala offers colors such as citron green, blue velvet, and green envy, all in the metallic coat. Chevy is also offering its new siren red color, which will include a tint coat at an extra cost. The Maxima offers a different array of colors, from Bordeaux black (which looks almost plum), storm blue, and forged bronze. The bronze and deep purple color aren’t available on the Impala.

Both vehicles feature exteriors that are sculpted and more athletic looking than previous models. The Impala offers halogen headlamps while the Maxima offers LED headlights in addition to taillights that are trimmed with LED accents. The Impala caps its wheels at 18 inches while the Maxima pushes their rims to 19 inches. The Maxima also offers dual mufflers with chrome tips and Goodyear Eagle F1 Asymmetric tires.

The Impala does feature body-colored door handles as well as an impressive interior. The Impala features options for wood grain and chrome accents on the dash, a Bose Active Noise Cancellation sound system, and available 4G LTE Wi-Fi. The option for the Wi-Fi lets you connected up to seven devices, which is pretty impressive considering that the Impala only seats five people. 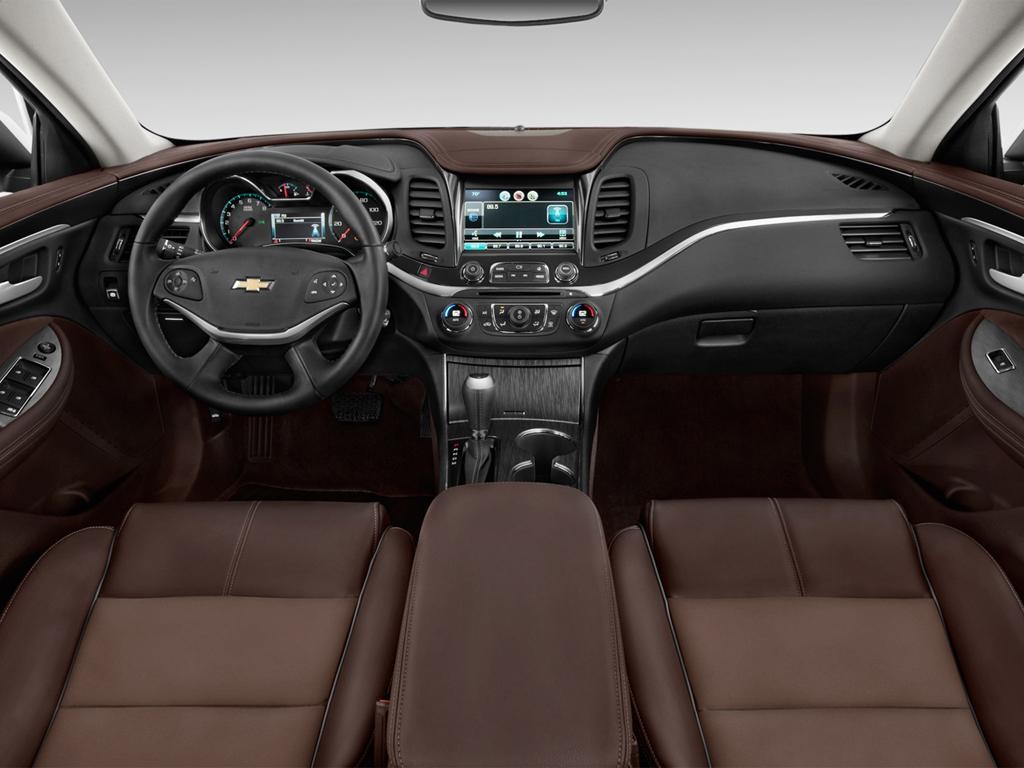 Featuring heated and ventilated seats along with six speakers, dual-zone climate control, and front bucket seats, the Impala is updated and sportier than ever before. It offers a leather-wrapped shift knob and a leather-wrapped steering wheel in addition to its 8-inch touchscreen and 18.8 cubic feet of cargo space.

The 2016 Maxima also offers an 8-inch touchscreen as well as an updated interior. Its sport-styled seats combine with its aerodynamic exterior design to create a sedan that’s anything but traditional. The Maxima offers a dual panoramic moonroof, a Bose Premium Audio System to compete with the Impala’s Bose Active Noise Cancellation System, and heated and cooled front seats on the Maxima Platinum model. The Maxima also gives you the option of Ascot leather appointed seating to appeal to your more luxurious side. 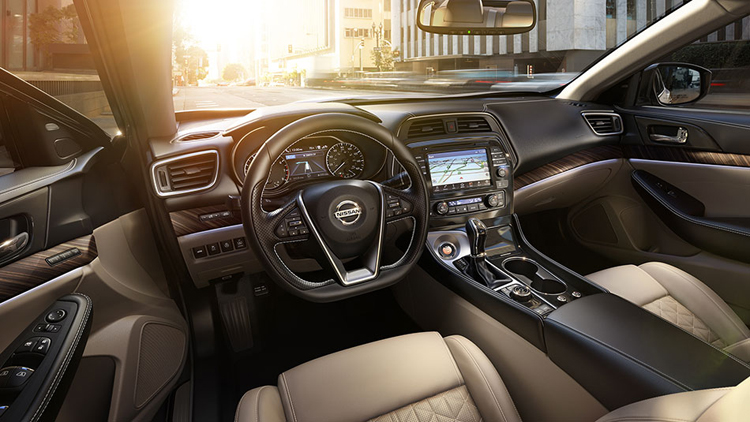 Many of the new vehicles for 2016 are featuring safety and technology features that have been refined since their beginning to offer the safest cars yet. How do the Maxima and the Impala measure up when it comes to technology and safety?

Let’s start with the Maxima. The 2016 Nissan Maxima offers Predictive Forward Collision Warning as well as Blind Spot Warning. It also features automatic collision notification, emergency calling, and stolen vehicle locating services. It also offers alerts for teenagers for when your Maxima has exceeded the speed limit, is being driven outside a designated area, or is being driven outside set hours.

The Maxima also offers active engine braking, active trace control (which helps you master turns by using inner or outer brakes to keep your vehicle stable), and active ride control, which keeps the suspension ideal in any situation. The Maxima also comes with sport-tuned suspension for 2016. In addition, the Maxima has drive attention alert, which monitors your steering and detects any unusual patterns, as well as traction control, vehicle dynamic control, and six standard airbags.

The Impala offers ten standard airbags and it’s gotten a 5-star safety rating with NHTSA (which the Maxima has also received). The Impala offers StabiliTrak, Forward Collision Alert, Side Blind Zone Alert as well as Lane Change Alert, Lane Departure Warning and Rear Cross Traffic Alert. With a rear-view camera and an OnStar basic 5-year plan, the Impala is designed to keep you safer than ever.

One impressive thing about the Impala is its Wi-Fi capability in addition to Apple CarPlay, which is ideal for iPhone users to use with Chevy MyLink to keep hands-free on the road while having some great tunes.

The last thing to note about these vehicle is probably the price difference—the Impala starts at just over $27k while the Nissan Maxima starts higher at $32k and goes up to nearly $40k. Although the Nissan offers a couple more luxury touches such as ambient lighting and a screen that tilts up to face the driver, the Impala will be the best bet for your money.

With relatively similar engines and fuel economy, the 2016 Chevy Impala and the 2016 Nissan Maxima both offer competitive full-side sedans for your next ride. With many of the same features offered for a lower price, the Chevy Impala impresses this year with all it has to offer in the way of technology, features, and a modern interior and exterior design. The functionality as well as the aesthetic quality of the 2016 Impala has surpassed its predecessors and made this vehicle one of the best new vehicles that Chevy has to offer for 2016.