The 2016 Chevy Malibu has This Year’s Coolest Tech

These days, the average consumer has some pretty high expectations when it come to standard technology in new car models. Gone are the days where the car phone was an amazing piece of innovation; now you’d be hard pressed to find a new model that won’t have a standard hands-free phone system, let alone things like cabin Wi-Fi and streaming music.

That’s why it’s impressive that even in today’s technologically-jaded environment we’re still so impressed by the amazing tech included in the new 2016 Chevy Malibu. Whether you’re a car freak or a computer geek, this new model is definitely worth everybody checking out.

Most noticeable is the 2016 Malibu’s standard 7-inch-diagonal color capacitive touch screen which dominates the dash panel, also available in 8-inch. This sleek system is quite eye-catching, and features an available 3-D navigation system, wireless phone charging, and Chevrolet’s MyLik technology. With this, passengers can stream music through a variety of services, play from a mobile device through Android Auto and Apple CarPlay, connect through various social media like Skype and Google+, and get help from Apple’s Siri. In short, you are pretty much never disconnected from your life just because you’re on the road in the 2016 Malibu.

The 2016 Malibu also features Chevy’s impressive Teen Driver safety software, which parents can use to monitor their teen’s driving habit to encourage safe driving. This includes monitoring when seatbelts are used, average speeds, distance driven, and how often certain safety features are activated. 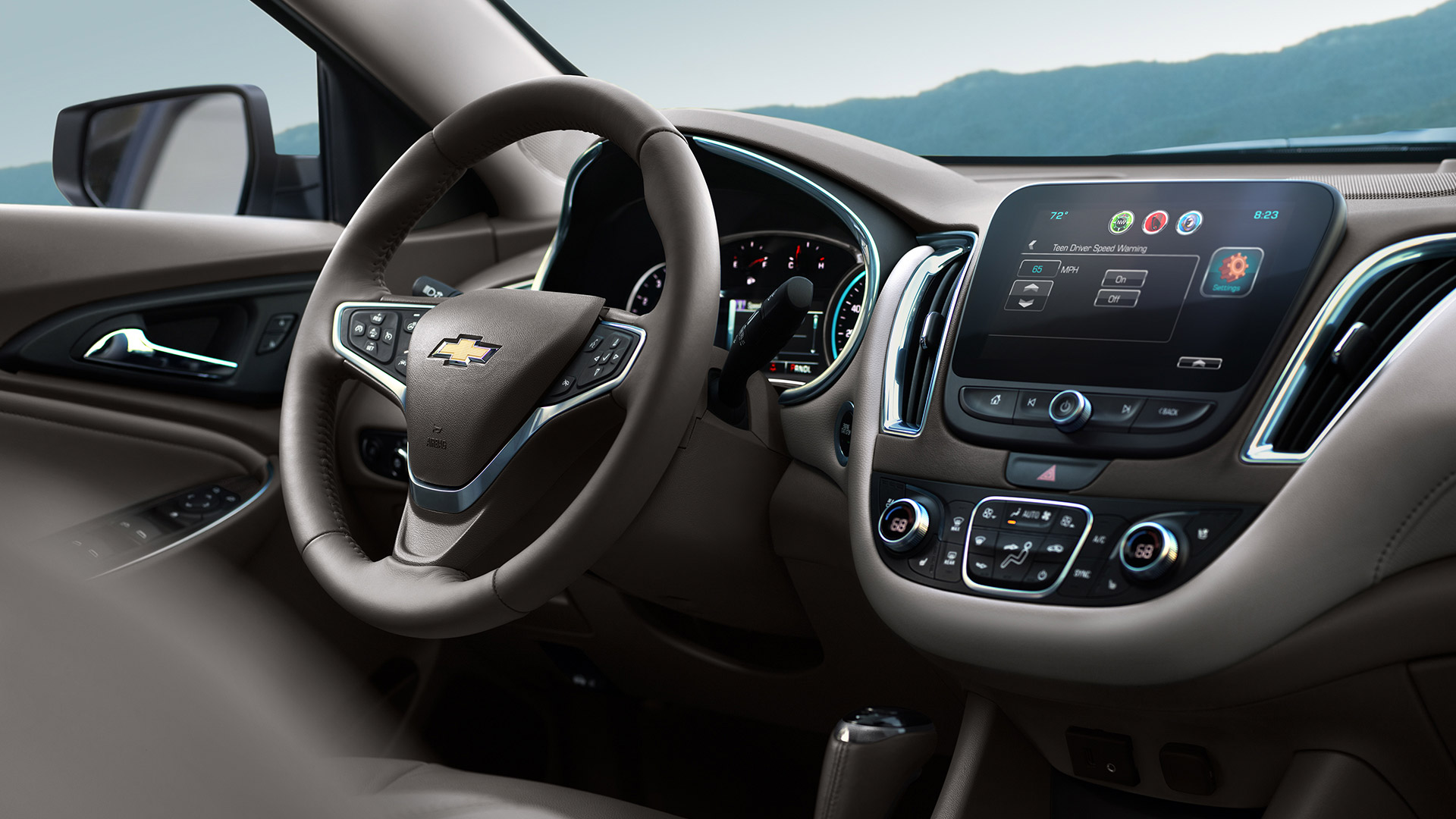 And safety features there are, from Chevy’s Front Pedestrian Alert automatic safety braking system that can detect oncoming pedestrians, to Lane Keep Assist with Lane Departure Warning, Side Blind Zone Alert with Lane Change Alert, Forward Collision Alert with Following Distance Indicator, Rear Cross-Traffic Alert, Front and Rear Park Assist, Adaptive Cruise Control with Front Automatic Braking, and Automatic Parking Assist to all make driving the 2016 Malibu as safe as possible for you and your passengers.

Honestly though, the most interesting tech on the new 2016 Chevy Malibu are the things you can’t see from the driver’s seat. This include’s Chevy’s new Exhaust Gas Heat Recovery, or EGHR, technology, which is premiering on the 2016 Malibu. This system actually recycles the heat generated by the vehicles exhaust and uses it to heat the interior of the cabin. Not only does this save fuel costs and keep your passengers comfortable, it also improves engine warm-up and ensures consistent fuel economy in cold weather.

The technology used o make the 2016 Malibu Hybrid so efficient is fairly amazing as well, as this new model shares the Chevy Volt’s blended regenerative braking system. This system recovers the kinetic energy produced by regular braking and stores it to recharge the vehicle’s 80-cell, 1.5 kWh lithium-ion battery. This means that the 2016 Malibu Hybrid’s battery does not need to be plugged in to charge, even though it can get the Malibu up to 55 miles-per-hour on its own.

So after over fifty years of high performance and reliable excellence, the Chevy Malibu continues to impress car aficionados with its commitment to forwarding the principles of great driving machines. If you haven’t taken a closer look at the 2016 Chevy Malibu yet, you owe it to yourself to do so.