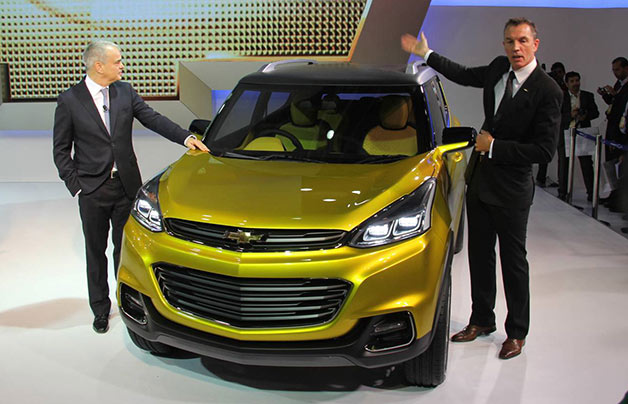 As of right now, the Indian auto market is still quite small in relation to the giants like North America, Europe and China, but at the rate things are going, that is likely to change. General Motors seems to think so as well, as they revealed their new Chevrolet Adra Concept crossover at the Delhi Auto Expo this week. This would most certainly lead one to believe that there will soon be another entry in the country’s popular compact CUV market, and a great one at that. While this won’t hit Cincinnati auto dealers, we love how this concept looks!

“The Adra is a major achievement for our local designers, who conceptualized and designed the model from the ground up,” said GM India President and Managing Director Lowell Paddock. “It represents a new possibility for the fast-growing compact SUV segment.”

The Adra Concept has been engineered specifically for the this market at the GM Technical Centre-India in Bangalore. Features include a large grille and headlights extending over the fenders that Chevrolet uses in many of its Southeast Asian vehicles. Yet, it adds sharper creases, especially down the center, and incorporates a rear shape that is most similar to the Kia Soul. Although Chevrolet isn’t revealing any technical details about the Adra Concept, a very modern interior with a large center infotainment system was visible.

The only foreseeable “problem” one could see is that the Adra, sitting at 4.2 meters in length, misses out on the lower taxes India grants on vehicles shorter than 4 meters. A Malaysian source, Paultan, predicts that if it does make it to production, that the Adra will shave a few inches off to take advantage of the government’s favorable classification. We are excited about GM, and more specifically Chevrolet, and their growing global presence!