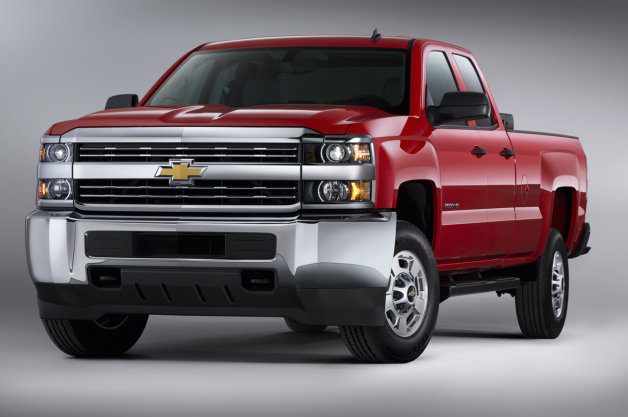 Get ready for some great news about the new 2015 Chevy Silverado HD! “CNG,” or compressed natural gas, has been something that has been tossed around a lot lately, but we will fill you in on what it does exactly. Using CNG as vehicle fuel actually offers a number of inherent advantages. It is both cleaner and more affordable, so companies with giant fleets of cars to manage can have big savings and a clearer conscience, and that is a really good thing! Maybe it is time to drop into the only full-line dealer of the Chevy car dealers in Cincinnati to see what the buzz is all about?

This CNG segment has been growing a lot recently, and in lieu of that, Chevrolet has announced a bi-fuel conversion kit for its Silverado 2500 HD and 3500 HD pickups, allowing them to operate on either gasoline or compressed natural gas at the flip of a switch. The conversion will be available on all body styles. “With CNG capability to be offered on all Silverado HD cab configurations, customers have a wider range of choices when it comes to selecting the alternatively fueled truck that matches their needs,” said Ed Peper, U.S. vice president, General Motors Fleet and Commercial. “And for companies and municipalities that maintain multiple trucks in their fleet, the fuel cost savings of CNG can really add up in a year.”

Let’s get some figures in here:
Chevy says that the 6.0-liter V8 would still churn out 301 horsepower and 333 pound-feet of torque running on CNG, compared to the 360 horsepower and 380 pound-feet on gasoline. Towing capacity remains the same (at a delightful 13,000 pounds) regardless of fuel source. Some may be quick to hound on the CNG model for the slightly lower power output, but the natural gas is over 60-percent cheaper than gasoline right now… and that is pretty substantial. Should we advertise two tanks for the price of one or something? If you work a CNG-powered work truck for 26,000 miles a year, you would save over $2,000 as long as natural gas is used 75-percent of the time. In tandem, the bi-fuel trucks have a range of up to 650 miles.

2500 HD double cabs and crew cabs are here and at other dealers now, with the 3500 HDs likely to hit dealers in July. “Silverado bi-fuel pickups are available through any of Chevrolet’s more than 3,000 dealerships across America just like any other model,” said Peper. “It’s one of the industry’s most seamless integration of OEM-delivered CNG vehicles.”