A Cruze Down Memory Lane

The new 2016 Chevy Cruze is on the way, and rumor has it that the release of the newest Cruze will be an even bigger success for GM than its previous models. The current model on the road is a solid choice all around, but more space and general refinement is on the horizon. Before we take a look at what is supposed to make this vehicle such a successful release, let’s take a Cruze down memory lane and reflect on the history of this “little-sedan-that-could” and talk about the features of each model year that put this sedan in the big league of small cars.

Before 2011, Chevrolet never really had a competitive car in the sedan class until they released the all-new small sedan, the Cruze. The first Cruze would put GM on the path to being a company that eventually made the Cruze GM’s most lucrative sedan on the automotive market. The Chevy Cruze was first released in the 2011 model year and it was the first time Chevy had offered an engine size that wasn’t too big for the designed vehicle, probably one of the reasons for its success. The Cruze could either be equipped with a 1.8-liter non-turbocharged inline-4 or a 1.4-liter turbo mill, making the Cruze a good contender with the other sedans on the market when it came to fuel-efficiency and performance. The leading competitors of that year were the 2011 Honda Civic and the 2011 Toyota Corolla, which are still two of the most common selling cars on the market, so the fact that the Cruze was a strong contender against these two powerhouses is saying a lot about that vehicle.

The Cruze came in four main trim levels: LS, Eco, LT, and LTZ that all had minor changes to the engine, but for the sake of your sanity and mine we will just discuss the features that were standard for all the trims.

The Cruze trims all came with a “twin cockpit” interior design and two-tone color schemes that provided the driver with good ambience. The Cruze’s overall interior quality was very good as well, further adding to this cars competitive edge. It had soft-touch materials in all the right places and very little shiny plastic, showing consumers at first glance that this car meant business. The fuel-efficiency to performance ratio was very good as well, with either engine putting out  fuel-efficiency estimated at 22 mpg city and 35 mp highway for a combined total of 27 mpg, right up there with the already fuel efficient Civic and Corolla of that model year.

As far as small sedans go, the Cruze was average for interior space. The front seats were just a little narrow, but they were able to be adjusted enough in order to make them suitable for driving and were still supportive and comfortable enough. Legroom was average, but the real shocker was the Cruze surprisingly large trunk. The trunk sat at 15 cubic feet, 3 more cubic feet than the Civics trunk capacity, which was what most of the other vehicles in the class offered.

The Cruze also received a top-five star rating for overall safety performance in government crash testing, no thanks to the vehicles lack of shiny plastic material I’m sure, with five-star ratings in both side and frontal impact categories.

One of the key elements about the Cruze that put Chevy on the map for the sedan market was how it handled on the road. The Chevy Cruze had genuinely athletic handling and comfortable control ride quality, something that was present but not as prevalent in the other sedans on the market. The Cruze had a new chassis that wasn’t  necessarily state of the art, but it still got the job done and ensured secure handling and a firmly absorbent ride.

There was something bigger than all of these aspects combined, however, and that was the price of this sedan. The 2011 Cruze started at a baseline price of around $16,000, which was average for cars in this class. However, what made the price of the Cruze stand out among all others was the features mentioned above. For example, the Honda Civic had okay upholstery and materials on the inside, whereas the Cruze was able to provide better quality materials and keep it to around the same price as the Civic.

Some of these important aspects were lacking in the Volt, such as the power to fuel-efficiency engine ratio, and the Cruze was here to make all that up for Chevy and finally give them a competitive place in the sedan market. 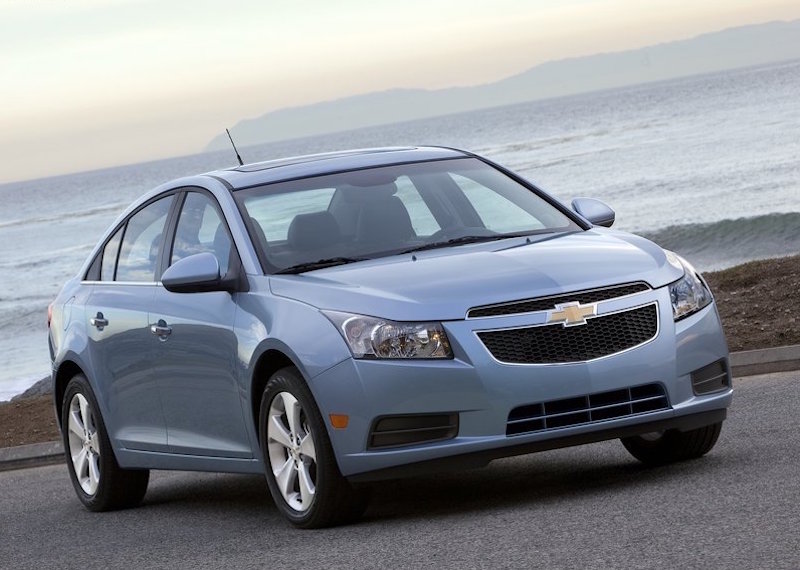 As far as 2012 goes, not much changed for the Chevy Cruze, which is impressive seeing as a year later it was still being offered in the same model design and trim levels and was considered to still be a competitor for small sedan cars on the market. The Cruze had it staple attributes everyone loves of five-star safety rating, high quality upholstery materials, the engine that balanced power and fuel economy, efficient mpg, tight and secure handling and a big trunk.

2013 marks the second generation of Cruze to be released on the market, and the Cruze was, yet again, offered in four familiar trim levels: LZ, Eco, LT and LTZ. These trims were all outfitted with the high quality materials that made the previous upholstery, a sleek looking new design, and some upgrades too.

The most obvious upgrade was the technological aspect of the vehicle, the base trim got comfort upgrades such as keyless entry, a tilt-and-telescoping steering wheel with audio controls, upgraded air conditioning, a six way adjustable driver seat, a trip computer, full power accessories, Bluetooth phone connectivity and a six-speaker sound system with a CD/MP3 player, satellite radio, USB port and an auxiliary audio jack.

While these fun upgrades were not necessarily pivotal, the fact that most of the goodies offered on the higher trims were also offered on the base model as well, such as a rearview camera and Chevrolet MyLink, were pivotal. This was something that was not being offered on other competitor’s vehicles, such as the Honda Civic, and gave the baseline trim of the Cruze an edge in that aspect.

The interior was upgraded again as well, becoming even more high quality, which was something that other competing companies decided to cut costs on, giving the Cruze an edge in comfort and interior design as well. There was some more plastic added to the inside, but it was durable, and the addition of cloth or leather-look trim on the doors and dash certainly helped to improve the look and feel.

The major change in 2014 was the addition of the Cruze Diesel, a trim that had a 2.0-liter turbodiesel four-cylinder engine that was rated at 33 mpg combined, competing for fuel-efficiency in the compact sedan diesel market now with cars like the Volkswagen Jetta TDI, and the engine in the baseline trim gets a combined 27 mpg, still competing with the other baseline models on the market. The Cruze won its usual safety awards this year as well, as well as maintaining its appeal as an average priced yet higher quality compact sedan. 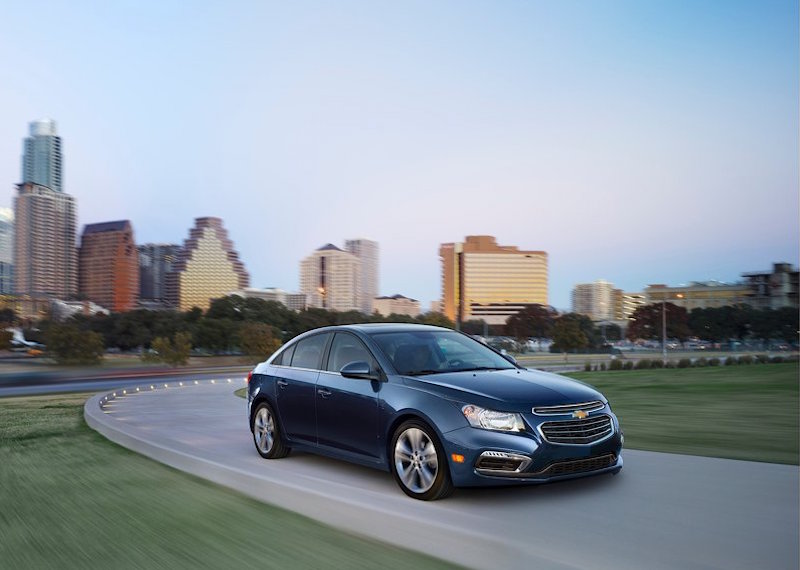 Not much changed for the Cruze in 2015. It doesn’t dominate the market but the fact that the same basic model since 2011 has been able to maintain a foothold in the market, a strong foothold mind you, lends credibility to the overall quality and original design of this model. Another new trim was created called “L,” which sees some minor changes in equipment, and expected technological upgrades were made in terms of comfort and safety. 2016 is said to be the big change for the Cruze, and it is rumored to be better than ever.

There is not much known about the 2016 Cruze model right now, but there is enough to realize it will be another big contender on the sedan market. There is talk of a whole new redesign, which will be built atop a new global compact car platform from GM, giving us a longer and roomier model. There is a new engine being introduced as well, it is going to be a 1.5-liter four-cylinder from GM’s new Ecotec engine family, and will likely replace the 1.8-liter base engine. The engine might be smaller, but the turbocharged four-cylinder should have no problem picking up the slack while providing even better fuel-efficiency.  There is also talk of a new eight-speed transmission for the newer models, as well as a possible coupe and hatchback trims. 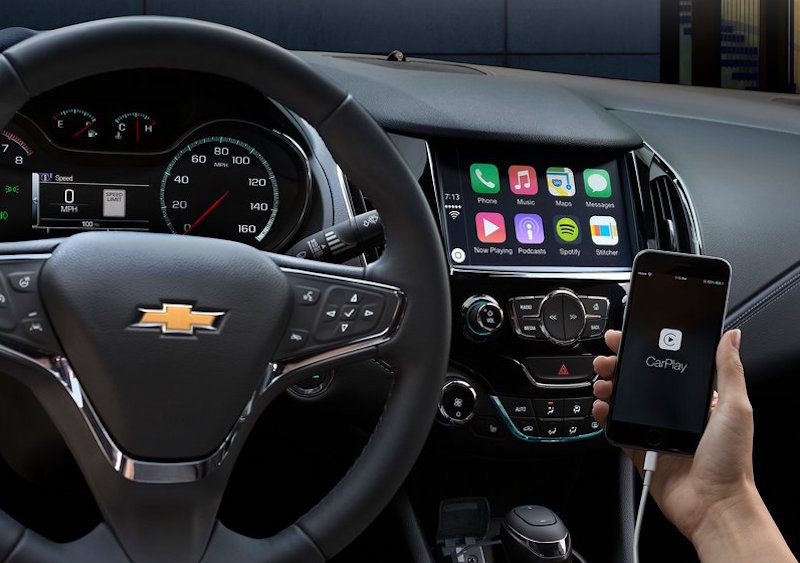 The Cruze was, unfortunately, delayed in production and will now be here in about a year. The Cruze is GM’s best-selling car globally, a feat that has not gone unnoticed. With GM’s attention  to upgrading what matters most with the sedan, and the consumers wants and needs, it is no surprise that the 2016 model has such hype built up around it. This model should, yet again, keep GM’s foothold strong in the competitive sedan market by providing high quality materials and upgrades, while still keeping around the average price of the other sedans on the market.

0 comment(s) so far on A Cruze Down Memory Lane