Lambrecht Auction made over $500,000 in classic Chevrolets 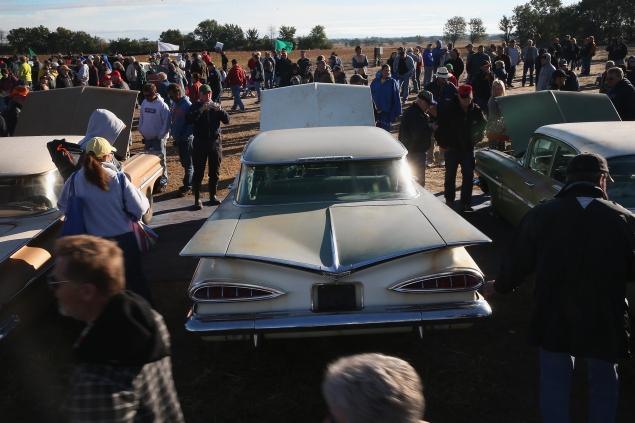 The Lambrecht Auto Auction has been a topic of conversation on this and many other automotive blogs over the past few months. The closed-down Chevrolet dealership was essentially a time-capsule, full of classic cars that were frozen in time, with very little miles. Some of the cars that the dealership unearthed when looking to begin selling off their inventory, were classic cars that had under fifty miles on the odometer. Most of the cars, despite being from the fifties and sixties, were not even in need of auto repair, because of their immaculately-kept condition.

The highly anticipated auction, that drew car-collectors from all over the world, took place this weekend in Pierce, Nebraska. With one day still to go, the Lambrecht’s made an estimated $500,000 selling fifty of the classic cars. The largest ticket item was  1958 sky blue Camaro, that only had 1.3 miles on the odometer. The rare vintage car sold at auction for a whopping $140,000, while a 1963 Impala sold for $97,500 – which is pretty impressive considering that it still sported the original window sticker with a suggested MSRP of $3,254.70.

The auction has been a highly anticipated and publicized event, causing automobile afficianados to come to Nebraska from all over the world. The Lambrecht’s, who held on to their collection for decades, storing the cars in their barn and other various spots throughout the town, agreed to sell their collection so that other people could  have a change to enjoy the classics as much as their family did over the years.

0 comment(s) so far on Lambrecht Auction made over $500,000 in classic Chevrolets