Man Tries to Sneak Turtle Dressed as Hamburger on Flight 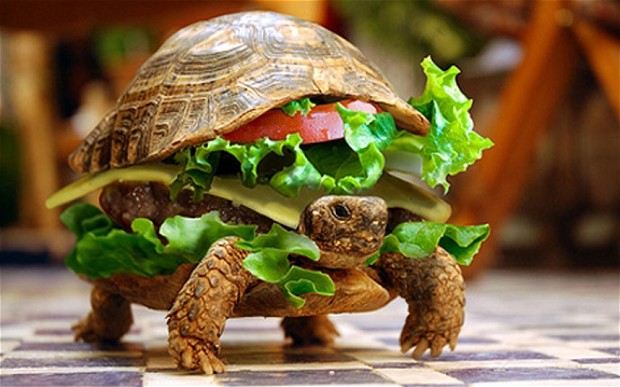 Okay, when it comes to strange news stories – you know that we’ve got you covered. Fast food is back in the news…well, sort of. We have heard of some peculiar things surrounding the famous restaurant chains, and most of them have to do with the few odd individuals that frequent the establishments. From suing a chain of restaurants because (surprise!) their coffee was hot, to riding a horse through the drive-thru and being denied, the possibilities of odd stories stemming from fast-food chains seem endless. With all the oddities happening in and around fast food, it’s a good thing that used cars Cincinnati Ohio have yet to be involved in the drama!

The newest of fast-food strange comes from across the world, and involves a shell, an airplane, and a man who really loves his pet. It all went down at the Guangzhou Baiyunn International Airport in China. “Mr. Li” was going through security when he was stopped by officials who noticed something out of the ordinary in his carry-on. The X-ray machine gave away what could have been the perfect disguise. Inside Mr. Li’s KFC sandwich box, was a turtle. Not just any turtle, but a turtle dressed as a hamburger. The suspect denied what the security officials suspected, and insisted that he was only carrying a burger with him.

It goes without saying that Mr. Li had to leave his pet turtle behind, and was not permitted to bring him on the flight. Despite the failing of his plan, we have to give the man props for trying.