Supervettes Kit (Sort of) Transforms a C6 Corvette into a C7 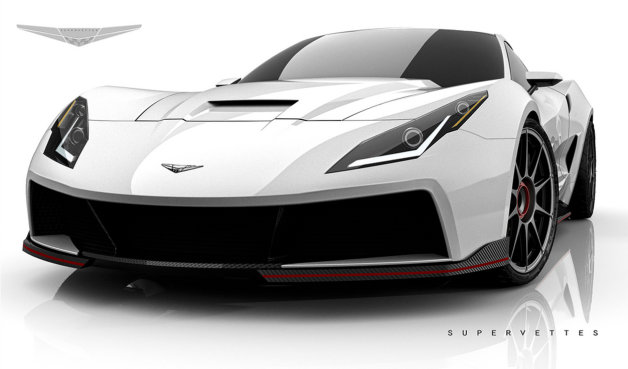 Let’s say that generally you don’t follow automotive news. You picked up a sixth-generation Chevrolet Corvette because you liked it, and then you returned back to the non-automotive world. During your travels, you spot a seventh-generation Corvette and you are instantly taken. You had no idea of the heavily redesigned Corvette, and immediately you find yourself want one, with its shapely new body and new rear taillights. Well, if you didn’t feel like going to your favorite Cincinnati Chevrolet Dealer, you could pick up that $60,000 you have had laying around to pick up Supervettes’ new SV8.R conversion.

This kit is designed to transform any 2005 to 2013 C6 into a shaper looking, more modern Corvette. It features a carbon-fiber body that’s supposedly inspired by older Corvettes, while still borrowing quite heavily design-wise from the new Stingray. Unlike the new Stingray however, the Supervettes SV8.R retains the four round taillights, and it is about five inches wider than a C6 ZR1. For those of you who weren’t too excited about the C7 taillight change, perhaps this is the option for you (but boy is that C7 pretty, huh?).

That isn’t everything that comes with the kit though. Buyers will also be getting new 20-inch front and 21-inch rear wheels shod in Pirelli Pzero tires. There will be a new exhaust, new brakes, new lighting and a fresh coat of paint to go onto the car’s new body. Eventually, interior treatments will become available, alongside some cool exposed carbon-fiber options. Five pre-orders are available, starting at $59,995, while future orders will cost an even $65,000. In terms of conversion kits, there have definitely been worse than this kit Supervettes has put together. We would love to leave you with one thought, however, and that thought is that a brand-new 2014 Corvette Stingray can be had for less than the price of this kit. We’ll hook you up with one!