The 1964 Chevrolet CERV II is up For Auction 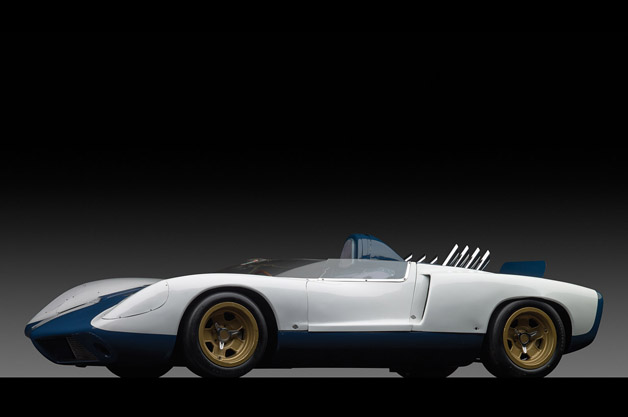 The RM Auctions show this week in New York is going to be seeing some extra special metal crossing over its block. Let’s just say that any Chevy Corvette enthusiasts should be paying extra special attention to Lot No. 139. Why you ask? Well, it is a vintage concept piece from Chevy, but also one of the most advanced for its time, signaling a change in direction. The Chevrolet Engineering Research Vehicle II (CERV II) is the “first known operating example of torque-vectoring, all-wheel drive.” Originally made in 1964, 1969 saw Chevy engineers using this car as a test bed for an aluminum 427-cubic-inch V8 capable of around 700 horsepower. As it sits now, the car is estimated to be at around 550 hp with a curb weight of just 1,848 pounds, but this may never be driven again. Selling prices are estimated between $1.4 and $1.8 million when it hits the block on Thursday.

The car sprung from the Golden Age of American car companies. It was during this time that the world saw such brilliant engineers and designers as Zora Arkus-Duntov. It is pretty rare to find an innovator that truly redirected the focus of the entire industry. If you weren’t aware, he has been rightfully regarded as the “Father of the Corvette.” Within no time at all, the Corvette had been cemented as “America’s sports car.” This was a time of great change and experimentation though, and rumors had been circulating that GM would make the next Corvette mid-engined like the Ferrari and Ford. This rumor wasn’t too off base though, as Chevrolet had been one step away from such a car with its radically different “Chevrolet Engineering Research Vehicle II” (CERV II). The most staggering advance at the time was Duntov’s attempt at four-wheel drive in the CERV II.

The most extraordinary characteristic about CERV II was Duntov’s attempt at four-wheel drive. The attempts beforehand had been lacking, and Duntov had a vision (and the might and power of GM behind him). In the spring of 1964, around the time the car was completed, General Motors informed Knudsen and Duntov that any ideas they had for racing were off the table. Repurposing it as CERV II, Duntov staunchly defended the single prototype, writing, “We feel that in case we are not permitted to go racing, we should obtain permission to demonstrate it…It will show that although GM is not in racing, its engineering is more imaginative and more advanced than anyone else [sic].” Demonstrations were pretty limited with the Grand Sport appearing at the same time, and it became sort of a test vehicle for exotic Corvette ideas in the 1960’s. It performed impressively in all regards, but there was no returning to it. After that, it ended up in storage and passed hands. The fact that it is still in one piece today, as it was handcrafted by Chevrolet with parts specific to the CERV II, is impressive in itself.