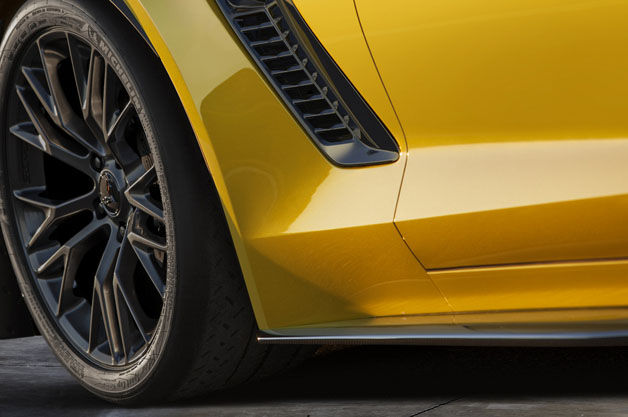 Okay, so to put it lightly, the Corvette Stingray is quite “capable”. Frankly, it is awesome, and Chevy has enjoyed much success with it, but we all knew it was only the beginning. Later this month, the Stingray Convertible goes on sale, but the version that has really been getting some buzz in anticipation is the Z06. Soon, that wait will be over. We can not wait! Heck, we are excited to even just do some oil changes and work on them (never mind the test drives)!

So far, the teaser shot above hasn’t come with much from Chevrolet as far as… well anything about the car or the release. It is confirmed, though, that the much anticipated new Corvette Z06 will be unveiled in full at the Detroit Auto Show next month. As far as we are able to tell by that small teaser shot, it has low-profile Michelin Pilot Sport Cup tires on lightweight-looking alloys, as well as carbon-fiber side skirt and fender-flare extensions. For those who don’t know, the Z06 (not the Z07 as it had previously been speculated) has been promised to be “the most track-capable Corvette ever,” and it was “designed to deliver supercar levels of performance through unique powertrain, chassis and aerodynamic features.”

Later this year, the Z06 will finally go into production, when it will join a growing family of performance Chevys, alongside the Camaro range, the great new SS performance sedan, and of course the rest of the Corvette lineup. “Chevrolet is America’s favorite performance car brand, and for 2014 we are going to offer enthusiasts more choices than ever before,” said Alan Batey, senior vice-president, Global Chevrolet. “No other manufacturer will be able to match the breath of performance cars from Chevrolet.” We certainly believe that to be true, and we can’t wait until these hit our lot. We will keep you updated on Detroit and any new information we gather about the Z06 as it comes to light!