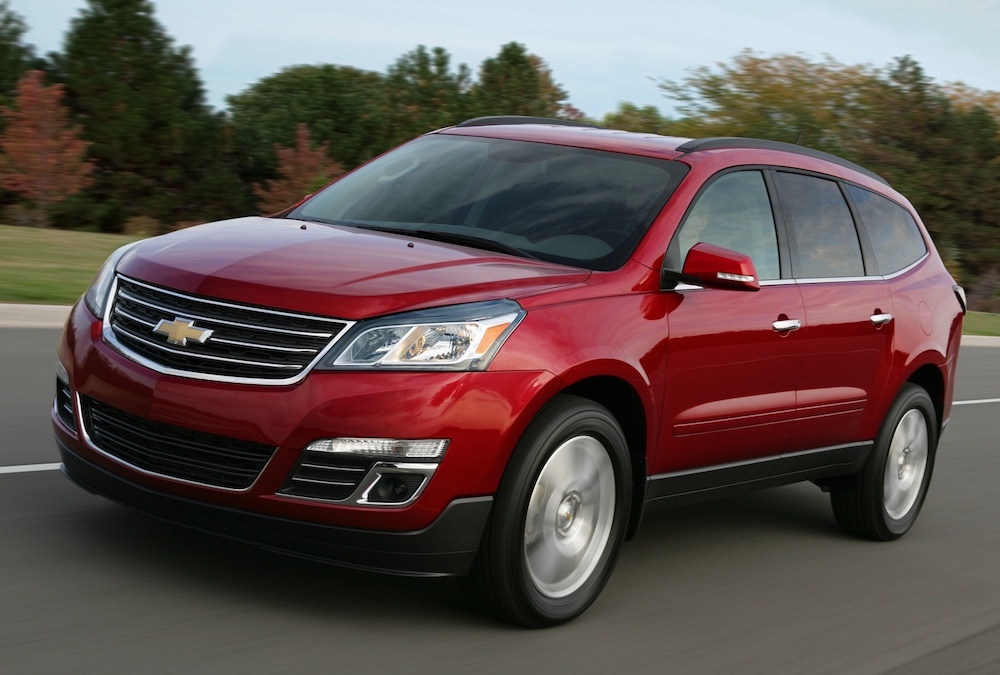 The 2016 Chevy Traverse crossover SUV is up against some stiff competition in the segment, particularly from the 2016 Ford Explorer. The Traverse isn’t nearly as well known as the Explorer, but that doesn’t matter. What matters is how it matches up against the Explorer, and you’ll find that it does exceptionally well for itself. In all the categories that matter for an SUV, it looks like the Traverse at least matches or bests the Explorer in terms of design, passenger/cargo space, performance, and efficiency. The price of the Traverse might be a little higher, but it looks to be well worth the money.

So grab your popcorn and a drink, because it’s time for these two SUVs to rumble.

In terms overall design, the question is: what’s more practical? The 2016 Chevy Traverse is taking a new approach to the design of a mid-size SUV, while the 2016 Ford Explorer appears to be sticking to the traditional SUV design.

As far as appearances go in the SUV world, the Traverse has one of the nicer ones. It’s much more rounded compared to your typical big and boxy SUV design, and it works. The rounded hood sweeps up the windshield, where the roof catches it and continues the curve all the way down to the tail-lights. Not only does it look sleek, like a cat ready to pounce, but it’s also practical. This design is much more aerodynamic than your traditional SUV, and it’s sure to be a lot smoother at highway speeds because of this.

The design is one of many reasons this crossover SUV is going to give the Explorer a run for its money. Even though it’s slightly bigger than the Explorer, the Traverse is a vehicle that balances the bigger size with a smart design.

The design of the Explorer is everything the Traverse isn’t: bulky, boxy, and impractical. The Explorer decided to keep the traditional SUV design, which is a big mistake in the mid-size SUV market. Sure, it makes a bolder statement and looks more intimidating, but it’s impractical for aerodynamic purposes. This SUV is going to suffer at highway speeds just like every other boxy and bulky one on the market. It will be harder to accelerate thanks to aerodynamics similar to that of an umbrella in high winds, and the wind coming in from the sides is apt to push it all over the road.

Those arguing that the rectangular design allows it to fit more passengers and cargo will be disappointed when the Traverse proves them wrong in that regard, too.

SUV stands for Sport Utility Vehicle. The sporty part comes from the engine and the vehicle part is because it’s on wheels. The utility part? The ability to be versatile when it comes to carrying passengers and cargo, which is the main reason people get an SUV.

These dimensions not only blow the Explorer out of the water, as you will see shortly, but they also put most other crossover SUVs to shame.

The Explorer might not have been whipped so bad if the Traverse kept it to seven passengers, but they didn’t. The Traverse one-ups the Explorer again, seeing as it’s able to fit one more passenger comfortably despite its negligible difference in passenger volume.

As far as fuel efficiency, the 2016 Chevy Traverse and Explorer are neck and neck. Both get 17 mpg city and 24 mpg highway with their base engines, and the Explorer’s fuel-efficiency fluctuates depending on which engine is equipped — but it’s nothing really game changing. 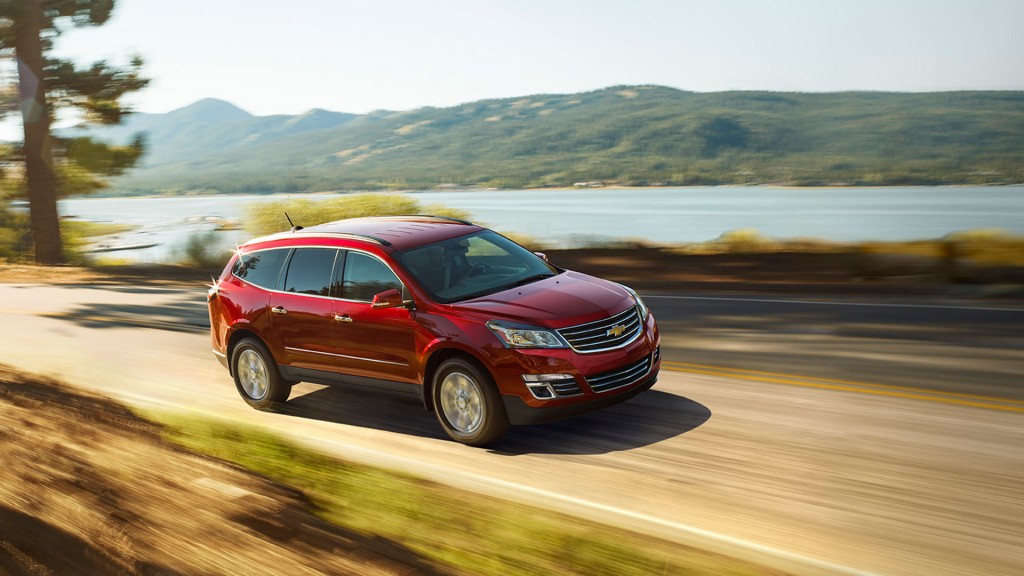 The 2016 Chevy Traverse has one engine option for all trims, regardless if that trim is FWD or AWD. That engine is the 3.6-liter V6 engine that puts out 281 horsepower from its single exhaust, and 288 horsepower with the dual exhaust. For torque, the Traverse is sporting 266 lb.-ft. torque with single exhaust, and 270 lb.-ft. torque with dual exhaust. Those are some decent numbers for a mid-size crossover SUV, and they provide the Traverse with enough oomph to tow up to 5,200 pounds when properly equipped.

Even though it just has one engine option, it’s still able to match the Explorer’s base 17 mpg city and 24 mpg highway fuel economy; while holding more passengers and having a better towing capacity. 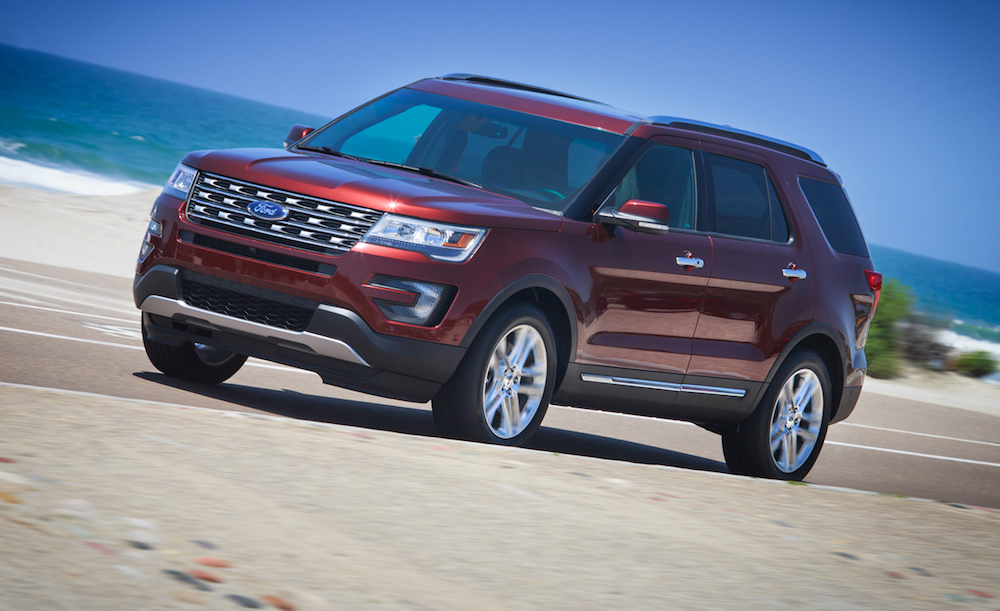 The base 3.5-liter V6 engine gets an insignificant increase in horsepower when compared to the Traverse’s 3.6, but it gets 15 less torque. The second engine option, the 2.3-liter EcoBoost I4 gets 280 horsepower and 310 lb.-ft. of torque, along with 19 mpg city and 28 mpg highway, which really isn’t enough of a difference to brag about. The big boy 3.5-liter EcoBoost V6 engine gets a whopping 365 horsepower and 350 lb.-ft. of torque.

Sure, this 3.5-liter EcoBoost might let it win a race against the Traverse, but the fuel-efficiency suffers and the Explorer still can’t match the Traverse in towing capacity. So, who’s the real winner here?

As far as pricing goes, the 2016 Chevy Traverse has a slightly higher starting MSRP of $31,205 when compared to the 2016 Ford Explorer’s $31,050. I use the phrase “slightly higher” loosely, since $150 isn’t that much of a difference at all. Or, maybe it is. If you think about it, spending that extra $150 is getting you a crossover SUV with a better design, more interior volume, great performance, and good fuel-efficiency.

For my money, it’s a no contest situation when these two face-off against each other. The Traverse is the clear winner (by a landslide) when it comes to the most important aspects of an SUV in an affordable package.