The New Cruze Diesel Has Everyone Talking: Here’s Why 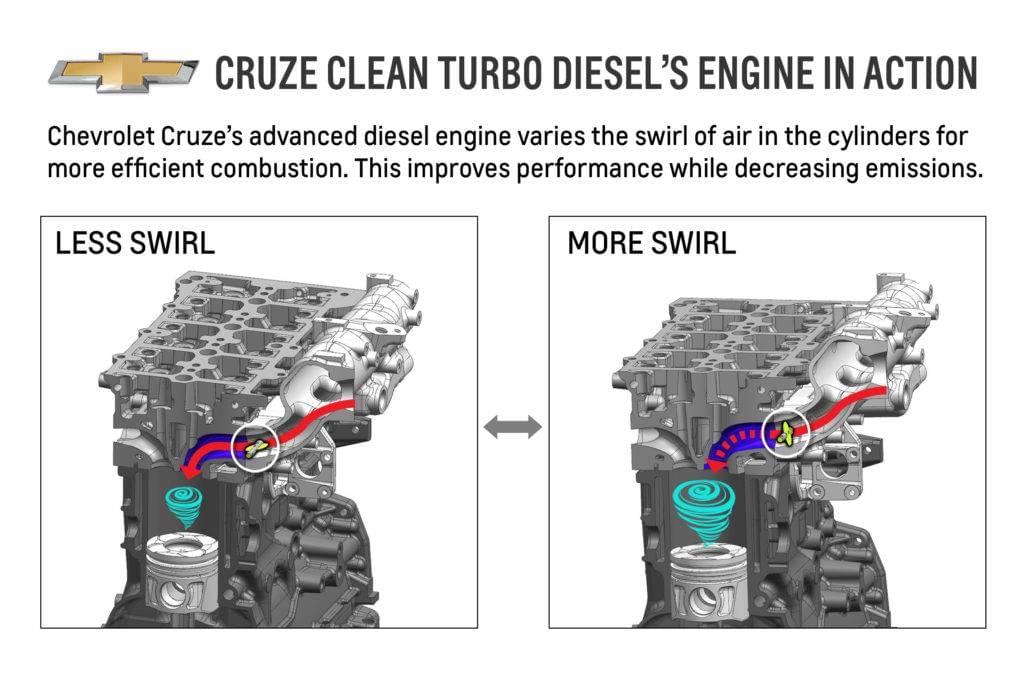 As Volkswagen wallows in its diesel scandal sorrow, and dutifully accepts the consequences of its deceit, Chevrolet is proving that capable diesel cars are capable of exceptional fuel economy ratings. When you are as good at engineering diesel engines (and the vehicles to put them in) as Chevy, you don’t have to install cheat systems for them to pass federal regulations. If only VW had taken a page out of Chevrolet’s play book, and spent the time necessary to design an economical diesel engine, rather than create intricate systems to cheat the law. Perhaps the VW brand would be gloating in glory alongside Chevrolet, rather than regretting the path it took from behind bars.

Despite the fact that Volkswagen decided to venture the wrong way when the path diverged, Chevrolet did quite the opposite. After tinkering, designing, engineering, and tweaking the Cruze Diesel model over the past several years – Chevrolet is releasing its most headline-catching Cruze model yet, to a Chevy dealership near you.

The Cruze Diesel – A Look Back

The compact Chevy Cruze car was released for the 2010 model year here in the United States, and it became an instant success with buyers in the highly competitive segment. Over the years, the Cruze has been offered as a hatchback, sedan, and even a wagon. With multiple variations and ways to make the model unique, it’s no wonder why so many buyers flocked to Chevrolet’s compact car.

When the bowtie brand fitted the Cruze with a diesel engine for the first time, it gave the compact car even more clout in the highly competitive car category. The first diesel powered Cruze was offered in the United States for the 2011 model year, and Chevrolet has continued to keep the diesel engine option as a part of the Cruze lineup ever since. As impressive as the previous Cruze diesel models have been, it is hard to argue with the fact that the newest 2017 Cruze Diesel is the most capable and exciting version of the compact car yet.

The Highest Fuel Economy of Any Non-Electric Vehicle

Despite the fact that gas prices in the U.S. are seeing an overall decrease, car shoppers are still placing a major emphasis on fuel economy ratings. The lowered gas prices are leading to an increase in cross country road trips, with many Americans opting to drive to their destinations, rather than pay expensive airfare prices. With this trend continuing to gain traction, car manufacturers are scrambling to find ways to increase fuel economy ratings and get more people behind the wheel.

Chevrolet has managed to do that and so much more with the upcoming release of the 2017 Chevy Cruze Diesel, a car that has everyone talking and competitors shaking in their boots. Not only is the newest Cruze Diesel a fuel sipper, it boasts the highest fuel economy rating of any non-electric car on the market. Perhaps most impressive is the fact that the Cruze Diesel outshines even the Prius when it comes to its EPA rating.

Rumors regarding the prospective fuel economy ratings of the 2017 Cruze Diesel have been swirling for quite some time, but in mid-February the U.S. Environmental Protection Agency released its official ratings for the newest edition of the compact sedan. With an EPA-estimated 52 miles per gallon on the highway, the 2017 Cruze Diesel is capable of traveling more than 700 miles on a full tank of diesel fuel. It beats the 2017 Prius by two miles per gallon – a small, yet mighty, feat. It is important to note that these numbers are only good when the engine is paired with the six-speed manual transmission, so for those of you who need to brush up on your stick-shifting skills, we recommend you get started now. For those of you who have no intentions of learning how to drive a car equipped with a manual transmission, the good news is that the 2017 Cruze Diesel still manages a combined fuel economy rating of 37 miles per gallon, regardless of whether it is paired with the manual or automatic transmission.

The 2017 Cruze Diesel model comes with a standard 1.6-liter turbodiesel engine capable of producing 137 horsepower and an aggressive 240 lb.-ft. of torque. Perhaps just as good, if not better, than the fuel economy ratings of the newest Cruze Diesel, is its low starting MSRP of just $24,670. For now, the updated Cruze Diesel is only offered in the sedan body style, but Chevrolet has announced that the hatchback will follow suit for the 2018 model year.

The 2017 Cruze Diesel marks the second edition of the alternative-fuel compact sedan model from Chevrolet. Now that we know what to expect in terms of fuel economy ratings, let’s explore more of what makes the newest Cruze Diesel a great choice for car shoppers in 2017.

0 comment(s) so far on The New Cruze Diesel Has Everyone Talking: Here’s Why