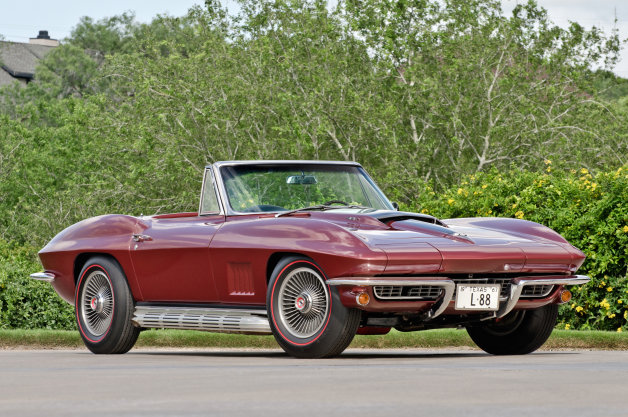 Typically, when you buy a car, you know full well that as soon as you drive off the lot the value will go down. This is an unfortunate but inevitable “law” that rarely makes compromises. When driving off the lot does not drive down the value of your car, it usually means that you are driving a collectable. Collectable cars have long been worth money, but it seems that in recent years, these rare gems in the automotive world are fetching a prettier penny than they have in year’s past. Most of the collectable cars that sell for top dollar are of the European persuasion, but this past Saturday, American made cars made a comeback – and we smell a very good change in the air.

The Mecum Dallas auction took place this past Saturday, where a L88-spec 1967 Chevrolet Corvette Stingray Convertible fetched a record-breaking $3.2 million. The record is the most any Corvette has ever been sold for before, either at auction or in private sale. The L88 model of the Corvette, is a racecar through and through. From the vehicle’s engine, to its suspension and power brakes – everything about the car screams racecar. The engine is a whopping 430-horsepower, which required Chevrolet to sell the original model with a warning sticker that the car requires racing fuel, no regular old unleaded for this all star on the road. So aside from its impressive specs, why else would someone pay so much for an old car? Chevrolet produced only 20 of this exact model, making it even more rare than most other vintage cars.

When sold, the car still sported the fuel warning sticker on its center counsel, making it even more of a rare gem.