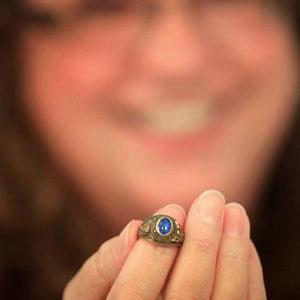 People make a living looking for stuff on the beach. The old-man with the metal detector (and accompanying fanny-pack) is a common sight down by the ocean. What would you do if you found something actually valuable though? Let us here at McCluskey Chevrolet, your Chevy Cruze Dealer Cincinnati, tell you about one woman’s amazing story.

Emily Geisler, a Kayaker riding the shores of Rigby Lake near Idaho Falls, spotted a shiny stone on the bank near the water. She got close and saw that the shiny stone was actually a diamond ring. Her first thought was that she was being pranked.

“I was sure someone was filming,” she said. “I looked around but nobody was anywhere near me.”

Emily didn’t know it yet, but the ring actually belonged to Necia Rasmussen. Necia lost the ring four years earlier. She had taken it off to sunblock her kids and lost track of it in the sand. She scoured the beach but was unable to find it. Luckily, the universe was working in Necia’s favor.

After Emily found the ring, she mentioned it at her local rotary meeting. Another member remembered that Necia had lost a similar ring in the same area. Emily contacted Necia and, of course, Necia was able to describe the ring perfectly. The two women met on the very same beach and Emily returned the ring.

The ring was a little dirty, but cleaned up as good as new.

“The whole event will keep me smiling for years,” says Geisler.

0 comment(s) so far on Long Lost Ring Found On The Beach!