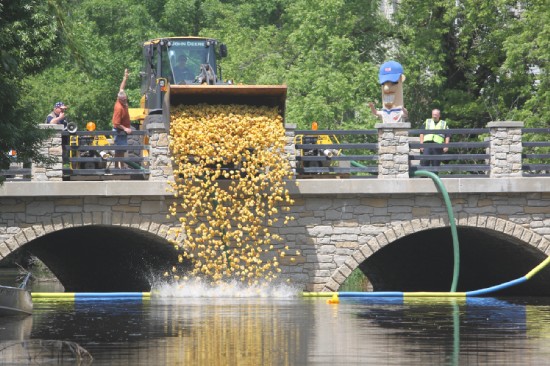 The saying, “pick your battles,” is both sage advise as well as a sort of warning. Getting upset over something that in the long run might not be worth it, just leaves people with headaches, hurt feelings, and nothing to show for it. While certain issues and plights are worth the fight, most of the day-to-day arguments end up going nowhere, with little to no change. Charities throughout the world come up with creative ways to raise money for their causes. The tired old dinner dances, and golf outings can get old. So creating fun ways to get people involved while reaching a fundraising goal, is important.

Charities in Wisconsin have been using rubber duck races to raise money for local fundraisers for years. Plastic ducks with numbers painted on the bottom are placed in a body of water, and the first duck to cross the finish line wins. Participants generally buy a raffle ticket that corresponds with the number on their duck, and fun and excitement ensues while helping a good cause. Unfortunately, lawmakers are taking events like these, and picking them as a battle to fight. Legally, these duck races are an illegal form of gambling. The village of Mishicot has been warned several times by the Wisconsin Department of Justice that the illegal duck gambling needs to stop.

State Representative Andre Jacque has proposed a bill that creates an exemption for duck races in Wisconsin. Similar laws are already in effect in Minnesota and Michigan. Hopefully Jacque’s bill passes so races such as the “Lucky Ducky Derby” in Menomonee Falls can keep with its annual event.