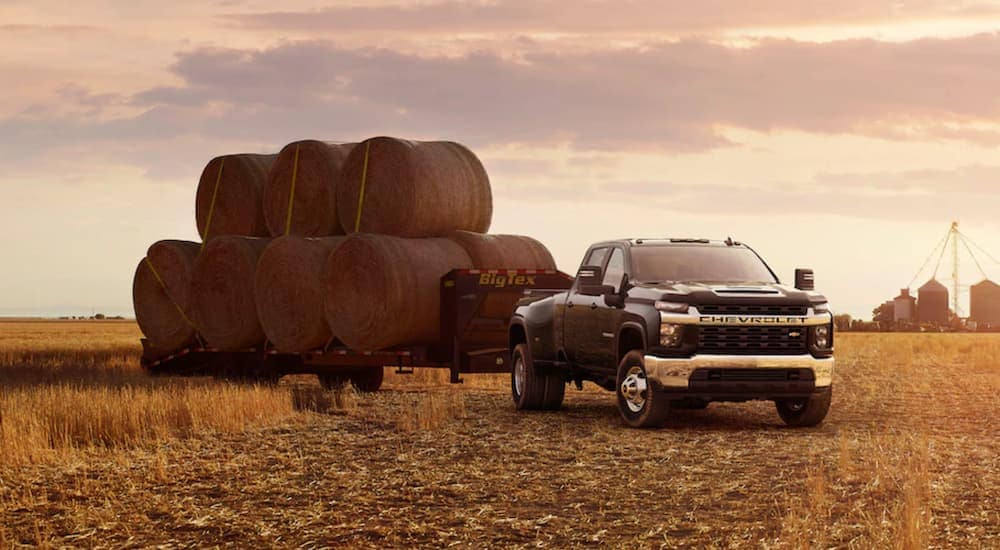 There are a lot of factors to consider when shopping for a vehicle; even if you narrow down your options and decide on a pickup, there are still many different things to figure out. When you start looking at Chevy trucks, and you are trying to find the right one for you, you can quickly get overwhelmed by options because there are a lot of ways you can customize your truck. From different engine options (the 2020 Chevy Silverado, for example, has six engines to choose from) and trims to cab size and bed length, it can be a lot to figure out.

Out of all of these options, payload capacity is one of the best ways to judge a truck and decide on which one is right for you. You’re going to see the terms “half-ton,” “three-quarter-ton,” and “one-ton” used to describe different Chevy trucks, and it’s essential to understand what they mean when you are in the process of buying one. In the past, these terms indicated how much payload capacity a truck had: a half-ton truck could be loaded up with half a ton of payload, while a three-quarter-ton truck could handle up to three-quarters of a ton of payload and one-tone, up to one ton of payload.

Today, the difference between a half-ton and a three-quarter-ton truck is also the amount of weight it can handle; however, these new models can handle much more payload. This means that the term “three-quarter-ton” does not necessarily mean the truck has a payload capacity of three-quarters of a ton, but just that the capacity is higher than that of a half-ton truck. But why is this information important, and how do the Chevy trucks compare? Let’s get into it. 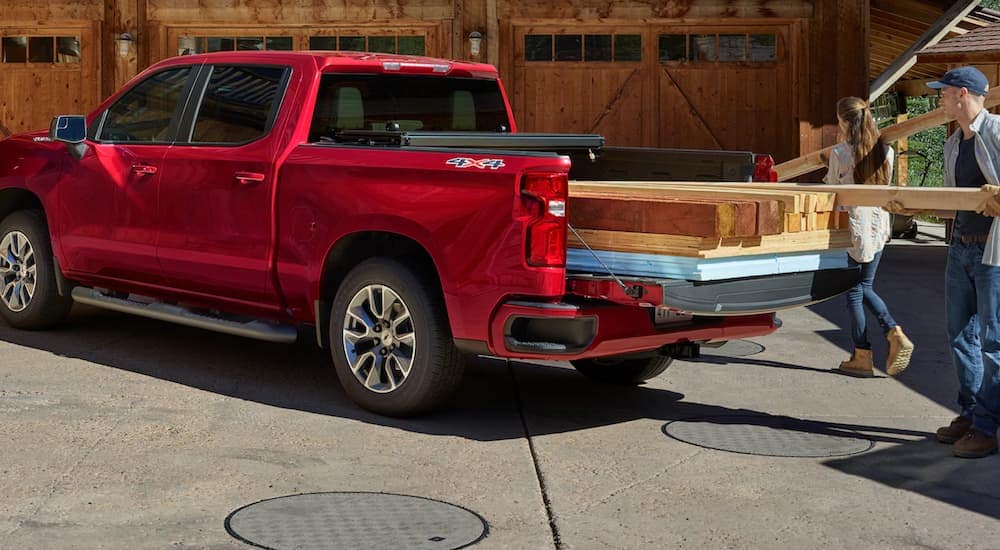 Before we dig into specs and information about some specific Chevy trucks, let’s make sure we’re all on the same page with what some important terms mean. First and foremost, the word “payload” refers to how much weight you can safely load up in and on a truck. This includes not only the cargo weight (stuff like lumber or coolers in the bed or cab of your truck) but also passenger weight. You never want your truck to carry more weight than its maximum rated payload.

This payload rating is determined based on two other things. The first is the Gross Vehicle Weight Rating (GVWR) for your truck. The GVWR is the maximum amount of weight that your truck can safely handle – including the weight of the truck itself. The second is the Gross Vehicle Weight (GVW), which is the actual weight of your truck itself, including the engine, body, and everything else. This is sometimes also called the “curb weight.”

When you subtract the GVW from the GVWR, then you get the maximum payload capacity for your truck. So now that you know about some of the main concepts involved with payload, let’s look at some specifics.

Half-Ton vs Three-Quarter-Ton vs One-Ton

These categories used to have specific meanings related to the amount of payload that a truck could handle. First of all, remember that we’re talking about US tonnage here: 1 US ton is equal to 2,000 lbs of weight. Don’t confuse this with the metric ton or “tonne,” which is commonly used in other countries in the world – they’re not the same. One ton in the US is equal to 0.907 metric tons, which is pretty close, but that’s a significant difference.

In the past, a “half-ton” pickup was a truck that could handle up to 1,000 lbs or half a ton of payload capacity. You’ve probably guessed it by now, but that means that a “three-quarter-ton” truck was one that could handle 1,500 lbs of payload, while a “one-ton” truck had a payload capacity of 2,000 lbs. Modern trucks can handle much more weight than before, however, so these terms are no longer used to refer to exact payload capacities. Instead, a half-ton or one-ton truck is now a general category with each description indicating more or less payload than the other categories. With all of that in mind, let’s look at some Chevy trucks to see where they fit into these sectors. 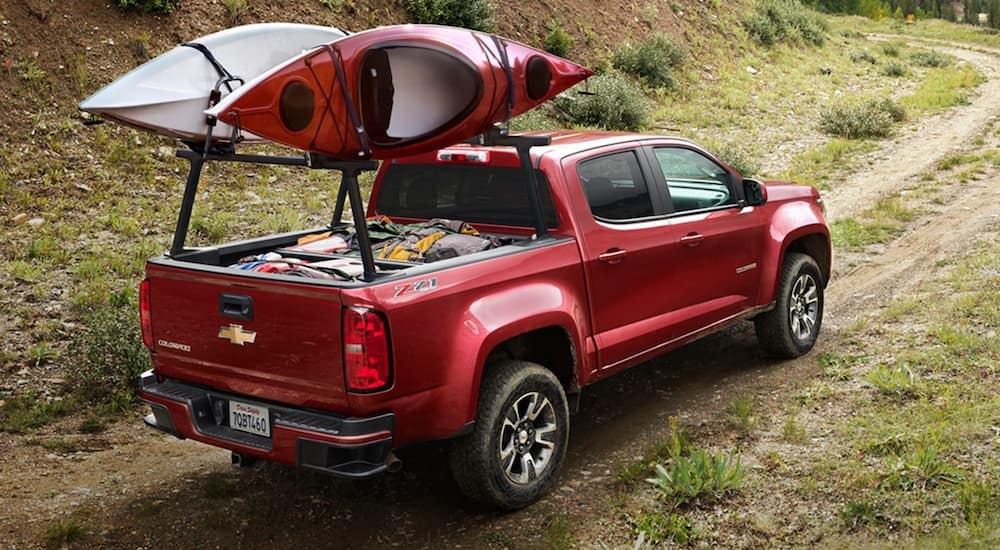 The descriptions of “half-ton” and “one-ton” have traditionally only been used when talking about full-size trucks. As a midsize pickup, the Chevy Colorado is, therefore, not one you’re going to see described by one of these names. However, if you don’t need a significant amount of payload, then give the Colorado a look. This midsize option has a maximum payload of just over 1,500 lbs when properly equipped. That being said, since this is a midsize truck and not a full-size model, you won’t hear anyone call it an “anything-ton” pickup.

Now we come to the first of our full-size options when looking at Chevy trucks, but the standard Silverado 1500 is a light-duty pickup. That means it falls into the “half-ton” category when looking at these trucks, even though the modern version of this pickup can handle well over a full ton of payload. Like we said, the term is a bit anachronistic, so you shouldn’t get too hung up on accuracy. Just know that when someone talks about a half-ton Chevy truck, what they’re referring to is the Silverado 1500.

Next up, we have the first of two full-size heavy-duty Chevy trucks that are available: the Silverado 2500HD. This is what would typically be referred to as a “three-quarter-ton” truck as it falls between the light-duty half-ton model and the even more powerful one-ton heavy-duty. When properly equipped, however, the current Silverado 2500HD has a maximum payload of nearly 4,000 lbs. That means you would be accurate in calling it a two-ton truck, but people would probably give you a funny look if you did.

At last, we come to the largest and most powerful consumer truck available to Chevy customers: the Silverado 3500HD. This is what would be referred to as a “one-ton” truck to indicate just how powerful and impressive it is. The dual-rear-wheel version of the Silverado 3500HD is the way to go if you want absolutely outstanding payload capacity since it can handle well over 7,000 lbs of maximum payload. It is, in fact, nearly a three-and-a-half-ton pickup truck, and at that point, you’re getting dangerously close to a commercial truck and the need for a CDL.

What About Commercial Trucks?

Speaking of commercial trucks, keep in mind that this old naming convention and these categories did not stop at “one-ton,” nor did they only apply to consumer vehicles. Once you move beyond these models and start looking at commercial trucks that can handle some serious weight, then you’re more likely to hear someone use an accurate description in referring to the payload capacity of a truck by how many tons it can handle.

For example, if you were looking at a powerful commercial vehicle and it was referred to as a “seven-ton” truck, then you should expect it to be able to handle around 14,000 lbs of payload. Once you’re looking at those kinds of trucks, the description is no longer a simple category and still has an accurate usage. So while you might see a Silverado 3500HD and call it a “one-ton” truck, if someone says they were driving a ten-ton truck the other day at a job site, you know they’re talking about a serious piece of machinery.

Get a Chevy Truck

After all of that, do you know which Chevy truck is right for you? Or are you still figuring things out? Either way, call or visit us at McCluskey Chevy to learn more, and we’ll help you find the perfect truck with the power and payload capacity that’s right for you.

0 comment(s) so far on Shopping Chevy Trucks by Payload