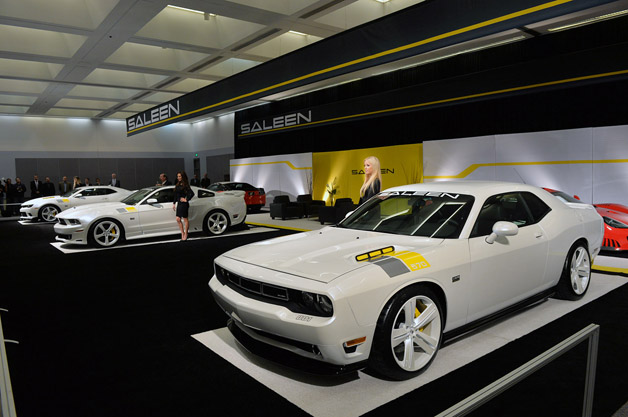 Saleen Automotive has been in the game for a while. It has been 30 years to be exact, and in celebration of its rich heritage, Saleen has decided to make a limited-production car line called SA-30. The SA-30 line will have 3 different models, based on the Chevrolet Camaro, Ford Mustang, and Dodge Challenger. There is only going to be 10 of each model made at a base price of $95,000. It is a good thing you can come to us for a cheap oil change after you pick one of these up. Let’s take a closer look at all the bells and whistles you get with that price point.

If you’re thinking about raking out that kind of dough, we should fill you in on some of the perks of these models. Buyers will get upgraded suspension, brakes and engines. The power figures haven’t yet been released for the SA-30 620 Camaro or the SA-30 570 Challenger models, but we know that the SA-30 302 Mustang will be the top performer at 625 horsepower. Not too shabby… huh? Each of the cars are painted up in a custom pearl white hue with black and yellow accents, with the white wheels and yellow powder-coated brake calipers to match. Like past Saleen models, the interior is properly treated with black leather and white Alcantara on the seats, along with the healthy amount of SA-30 badges spread about. “When we began exploring some new Saleen styling that we wanted to debut with the SA-30 vehicles, we knew that we wanted something that spoke of our ‘Born of Racing’ heritage and a rear seat delete came as a natural choice for the SA-30”, said Sean Smith, Design Director. “Through the fastback design and we were able to add a lot of refinement to the interior while still retaining the racecar environment.” So yeah, there is a rear-seat delete option for those who want a true race-inspired interior.

On all of the SA-30 models, customers will have various options available to further customize their cars, such as the rear-seat delete option mentioned above. Perhaps one of the coolest features of all is the Saleen Frost-Touch Glass that is an option on the SA-30 302 Mustang. It is similar to the Mercedes Sky Control roof that was first introduced on the Mercedes SLK, and it allows the Mustang’s optional glass roof and rear window to be switched from transparent to opaque at the push of a button. “With past models, the panoramic glass roof was a fantastic compliment to any Saleen vehicle, but our #1 request was to develop a way to shade the glass without having to apply standard tint or add interior hardware”, said Sven Etzelsberger, VP of Engineering. “We began working with this technology some time ago and it has come to the point where we are able to completely frost the rear window to the panoramic glass roof almost instantaneous.” It apparently uses suspended particle technology, which utilizes an electric current to energize and align otherwise randomly placed particles. It sounds really cool, and UV protection is increased by 98% when activated.