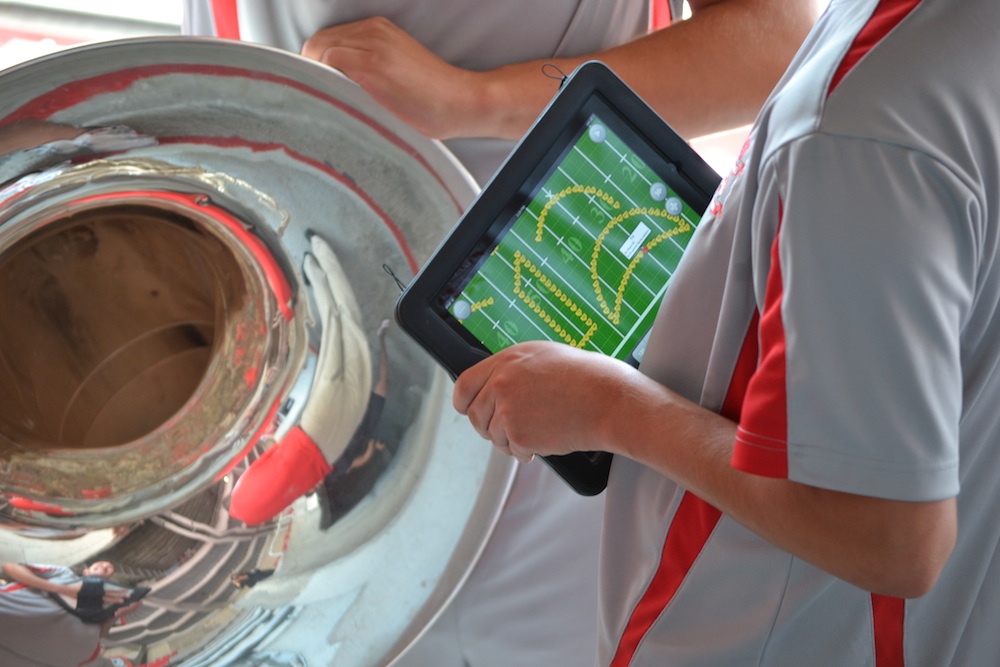 The Ohio State Marching Band has been making us extraordinarily proud with their execution of seemingly impossible choreography in the field. From the giant, moonwalking Michael Jackson a few weeks ago, to the blockbuster hits performance that featured a giant walking Tyrannosaurus rex, the band moves seamlessly along the field. It is not just countless hours of practice that have lent to their perfect performances, but something else as well. What helps them pull off this amazing performances? Well, like everything else in the world (it seems), there is actually an app for that. Not only that, but this improved quality comes at a cheaper cost, not unlike getting an oil change from McCluskey! Let’s take a closer look.

It’s true, when “Today” show correspondent Dylan Dreyer took a look into the inner workings, of the OSU band’s choreography, he found a plethora of iPads on the field. A specialized app helps marchers perfect every detail, from timing to their exact positions on the field. It’s apparently so much more efficient than using paper-based routines that players can learn complex new formations seemingly on a weekly basis. “It’s been a really tremendous opportunity to use technology in what is really an old medium, and that’s the marching band,” band director Jonathan Waters noted.

It seems that at the beginning of this years season, iPads were delivered to 45 OSU band squad leaders, staff and directors. An improved bonus to these is that it is expected that it will help OSU cut down on paper costs. Prior to the implementation of this, a 30 to 40 page packet was handed to each performer. That’s over 200 students, with eight shows in the season typically, which costs about $24,000 a year (just on paper and printing!). Let’s take a look back at the performance of the Hollywood blockbusters from the previous weekend, and see what the iPads have aloud the performers to do!