Running with the bulls event coming to a U.S. city near you 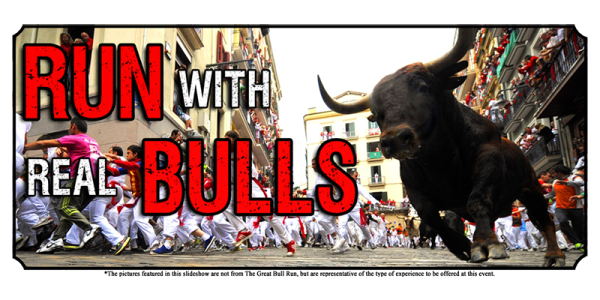 Adrenaline junkies are a definite part of our world today. Thousands of people jump out of airplanes every day in the United States, countless individuals participate in extreme sports, and more and more people list activities such as “bungee jumping” on their Facebook profiles. Yes, the need for some people to put themselves in danger to feel alive is most certainly apparent. While a good old fashioned past-due oil change is the most daring some people get, there is a long line of others who are chomping at the bit for an opportunity to get their adrenaline pumping.

The Running of the Bulls is a longtime tradition in Spain, and is a magnet for thrill-seekers around the world. Perhaps the popularity in and of itself was all the encouragement organizers of the event needed to expand the festivities to the U.S. The Great Bull Run will kick off in Richmond, VA on August 24, before it spreads to cities in Texas, Illinois, Florida, California, Minnesota, Pennsylvania and Georgia. The dangerous event is being altered for the U.S. version, which will include notches along the fence that participants can quickly disappear into if danger is imminent. The organizer’s website states that dangers include being “trampled, gored, rammed, tossed, bumped, or jostled” and also state that “We do what we can to minimize those risks by using less-aggressive bulls than those used in Spain and allowing runners to hide in nooks and climb over the track fence if necessary, but make no mistake: You could get seriously injured in this event.”

If running with the bulls is on your bucket-list, but trekking to Spain isn’t – then get out your pens, sign your waiver, and get running! Participants will pay $35 for the event, and the less-daring can pay $10 to watch in the stands. Andale!

0 comment(s) so far on Running with the bulls event coming to a U.S. city near you