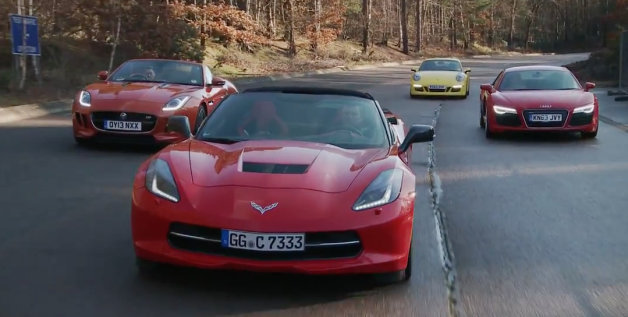 Now, favoring the home team is hard to avoid doing. Being unbiased is tough. Heck, there was just that Sochi debate about the skating scores raising questions about the home crowd response boosting Russia’s skating scores. In the automotive world, it is no different. European auto writers, especially the British, are known for favoring their own domestic cars over foreign rivals in comparison tests. Just think of Jeremy Clarkson and his railing on our “Yank Tank’s,” while he heavenly praises the latest in UK pedigree. Not all writers are created equal though, and we must recognize the unbiased, rational comparison of Autocar in its latest video. You’d think it was a review from a Cincinnati auto dealer by the way they are describing it! The video itself compares the 2014 Corvette Stingray to the Jaguar F-Type V8 S, Audi R8, and the Porsche 911, and it definitely gives the Stingray a fair run through.

Autocar put the Stingray though a laundry list of tests, pitting against what they consider to be the three best sports cars on sale in Europe today. After all was said and done, they concluded that the C7 can absolutely stand up against its rivals, even irrespective of its price. So yes, while we do love hearing praises of our beloved Chevy from American writers, it is all the more sweet to hear the validation from a group of British writers! Check out the video below!