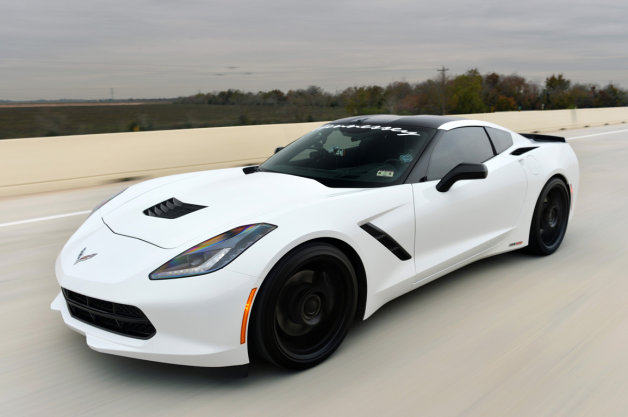 It was just a short matter of time before we expected to hear about Hennessey Performance getting their hands on a seventh-generation Chevrolet Corvette Stingray. We also knew that once they got their hands on one, big things were about to go down. How big? Well how about a 200.6-mile-per-hour run on a closed section of Texas’ brand spanking new State Highway 99. Yeah, it was a little bit bigger of a happening that we expected. Maybe we can set up a run somewhere near our Chevrolet dealer in Ohio? That would be awesome!

The run wasn’t just for the C7, but also to test out the new toll road – a road that Hennessey founder John Hennessey described as “perfectly smooth”. It was also to test the RFID toll system, which was surprisingly still able to tag the Corvette at 200 miles per hour (so if you’re thinking of trying to evade a toll, good luck). The model we are looking at here is actually fitted with a Hennessey HPE600 package, which includes long-tube headers, ported cylinder heads, high-flow catalytic converters, and an HPE camshaft and engine tune. For those who want a little more speed (somehow), there is also a 100-shot of nitrous oxide available from the Nitrous Express Kit. It is a bump to 700 horsepower from the standard 460.

You may have noticed the word “supercharger” didn’t pop up in our examination of the modifications, and that is because this isn’t the supercharger! Hennessey is working on a Stingray that can hit 200 without the nitrous called the HPE700, that adds a TVS2300 supercharger and new induction system to the awesome mods we got in the HPE600 (costs $22,500). Check out a video of the run below, and let us know what you think! Personally, we love that blistering roar and we think you will too!