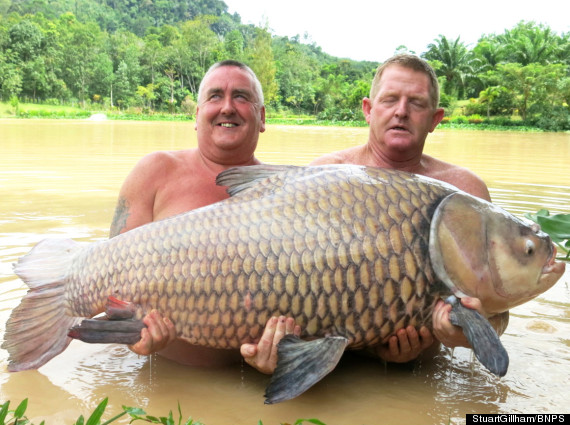 There is nothing we love more then a tall tale. While some hobbies lend more stories than others, fishing seems to be one of those activities that lends itself very well to stretching the truth. Men and women alike tend to “catch-and-release” HUGE record-breaking fish nearly everyday. Unfortunately for them, with the advancement in cell phone technology and access to internet nearly everywhere around the world – it has gotten harder and harder to make up tall tales regarding what they reeled in for the day. So, when it just so happens that your unbelievable fish story comes to fruition, make sure you have your trust cell phone by your side to snap a picture and prove your record-breaking change in fish catching, actually happened.

Lucky for Keith Williams of Britain, he just so happened to have that camera phone ready when it actually counted. The British man was vacationing in Thailand when he went fishing for the day with a few of his blokes. Williams spoke to his wife before leaving the resort where they were staying, telling her that he “could feel in his bones that he was going to catch a special fish that day.” Williams might as well go into fortune telling, because he snagged a carp that weighed in at 134 pounds, seven ounces. He claims it took him 25 minutes to reel in, but the effort was worth it. It is believed that Williams broke the world record for the largest carp ever caught, but it is still pending confirmation by the International Game Fish Association.