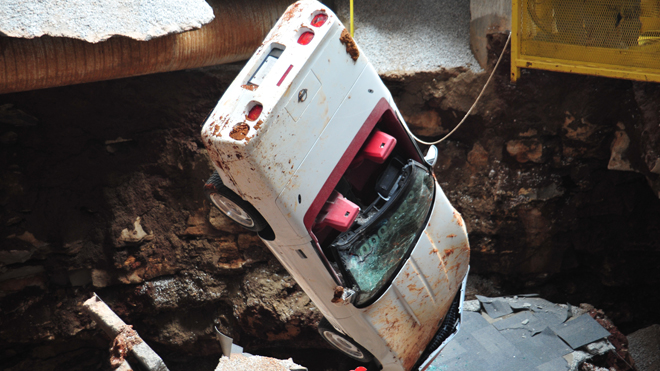 We here at McCluskey Chevrolet, pride ourselves on being your number one choice of used car dealerships in Cincinnati. If you love cars, trucks, and SUVs as much as we do, then you are probably as equally upset when you learn about damage to historical or vintage cars. Certain vehicles will forever go down in history as being iconic, and one of a kind. One of the most iconic automotive make and model is easily the Chevrolet Corvette. Here at McCluskey Chevrolet, we have some of the newer models for sale, including the newest 2014 C7. Each time Chevrolet rolls one of these beauties off of their assembly line, heads immediately turn. The vehicles are iconic in their own right, and the most iconic of these has been on display at Kentucky’s National Corvette Museum in Bowling Green, Kentucky.

As many of you probably heard, last month a giant sink hole opened up underneath the museum’s floor, swallowing classic Corvette models that were both owned by the museum, and on loan from other collections. Just today, the one millionth Chevrolet Corvette that was ever built, was pulled from the sinkhole’s rubble. The recovery attempt began this past Monday, with four of the eight cars having already been recovered. The white over red convertible was donated back in 1992 to the museum by General Motors. Luckily, all of the damage to the one-millionth Corvette was all cosmetic in nature, with the museum reporting that the frame and undercarriage are both in good condition.

Car enthusiasts around the world watched the video of the iconic cars being swallowed back in February, but can now breathe a sigh of relief as the process of recovering the vehicles is halfway through. General Motors has generously pledged to fully repair all of the damaged cars from the sinkhole incident, despite the fact that the museum is privately-owned.