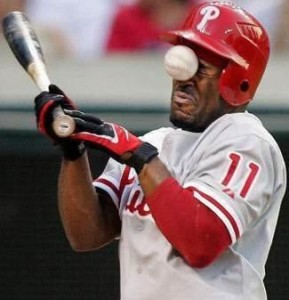 Baseball injuries aren’t as common as injuries in other, full-contact sports, but they do happen. Muscles are ripped, tendons are torn, and shoulders get blown out. One of the most violent looking baseball injuries though, is getting hit right in the face by a pitch. The sudden gout of blood and the terrible noise would make anyone panic a little. What happens though, when the person hit isn’t a player, but an unsuspecting fan? Let us here at your Chevy Dealer Cincinnati tell you all about it.

It turns out, when a fan is the one who gets hit by an errant ball, lawsuits happen. Is the lawsuit justified though? We’ll let you be the judge.

Elizabeth Lloyd, a New Jersey Woman, is demanding more than $150,000 to cover medical costs and pain and suffering after being struck by an overthrown ball at a local little league game. 11-year-old catcher Matthew Migliaccio was warming up a pitcher when his return through went over the bullpen fence. The ball struck Elizabeth in the face while she was eating at a nearby picnic table.

Some people are arguing that the child should be held responsible, that it was a malicious throw. Others are saying that the woman should be aware of the dangers of sitting near a little league field. The league itself is claiming no responsibility, leaving little Matthew on his own.

The Migliaccios are getting a lawyer to help with the lawsuit. We think he sums up the situation best. ”I just think that it’s disgusting that you have people suing an 11-year-old kid for overthrowing his pitcher in the bullpen,” the lawyer said. “It’s horrible this can actually happen and get this far. Ultimately, hopefully, justice will prevail.”

0 comment(s) so far on Woman Hit By Pitch!