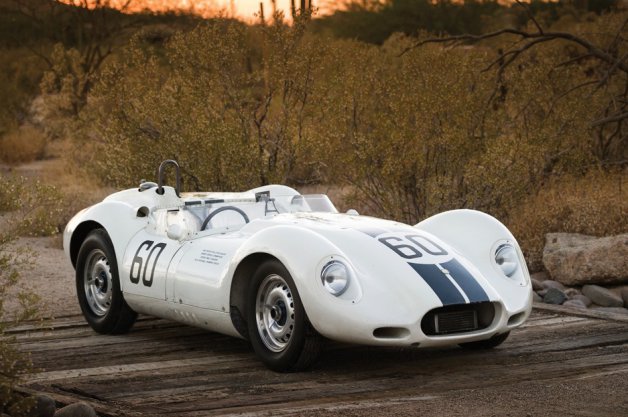 Remember Lister Cars? It was one of those pedigree names of British racing from its inception back in 1954 and then on and off until the early 2000s. The company combined its own lightweight chassis with engines from other manufacturers, which at the time featured many British engines like those from Jaguar. Last year, the name and intellectual property were sold to a new company that planned to revive the brand. For Lister’s 60th anniversary, it is building a new version of one of its most famous race cars, the 1958 Lister-Jaguar Knobbly. Oh, and Chevy fans, there is an optional engine that you can find at some of the Chevy car dealers in Cincinnati.

These 2014 Listers are built to the exact specifications of the original, with the aluminum bodies even being hand-formed on the original jigs. It is offered in racing trim starting at $409,618, and is certified for FIA historic racing. For those of us that just want to turn some heads on the open road, the road-legal version will cost you $426,060 (but thanks to high cost, it is likely this version won’t be available to US buyers). There are two engines available, just like in the original car. A reproduction Jaguar D-Type 3.8-liter inline-six with dry-sump lubrication pumps out 330 horsepower and 295 pound-feet of torque with a four-speed Jaguar gearbox. The other option is a mean 4.6-liter Chevy V8 with 315 hp and 290 lb-ft with a four-speed manual transmission. Chevy makes some big engines, and opting for this option gets you a slightly altered body with a higher hood to clear the engine.

Lawrence Whittaker is the Managing Director of Lister Cars, and he said:

“2014 is a very special year for us, as it celebrates 60 years since Brian Lister built the first Lister car at George Lister Engineering. Today we are still hand-building cars at George Lister Engineering in Cambridge and use many of the traditional methods that were used in 1954, as well as one or two of the original engineers. It’s fantastic to think that Lister has a 60 year history as an all-British owned car maker, and that it now has a fantastic future ahead of it. April is a key month for us in 2014. We will have two press cars available around that time which will allow us to officially unveil the car to the world’s media at a dedicated launch event at a track venue in the UK. Watch this space!”